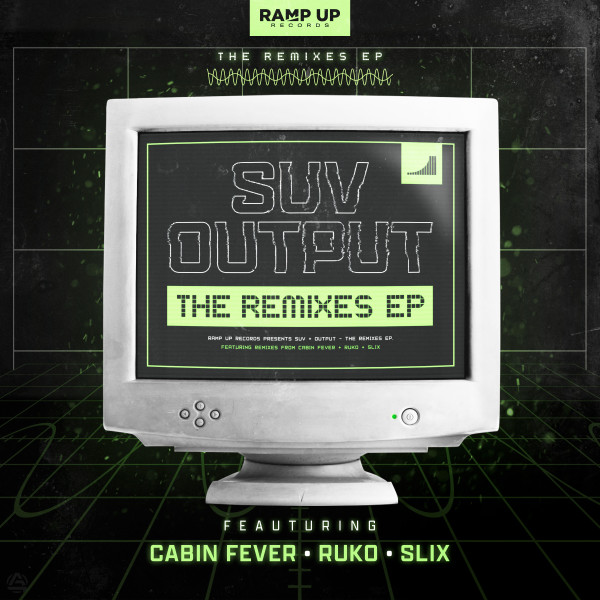 As all real heads know, the streets of Bristol have blessed us with a pantheon of drum 'n' bass legends. Over the years, the city's music scene has become synonymous with a special kind of multi-cultural stylistic blend that's drawn the attention of the world to this little corner of south west Britain. And, now, Ramp Up Records are here to continue in that tradition.

And, as you can tell by the mighty Suv's name on the first release, they're not here to play around.

First time out, in 1997, the bassline-bubbling roll-out known as 'Output' sounded like future music from a more rhythmically advanced society, so perhaps it's no surprise that it's still capable of making waves nearly twenty-five years after first appearing.

Cabin Fever UK's rework – layering insistent stuttering breaks over that addictive bassline to deliver a frenetically energetic heater – comes first. Cranking up the bpm for contemporary dancefloors while retaining that authentic Bristol Sound vibe, this tune demonstrates perfectly why 'Output' is ready and waiting for a new lease of life in 2021 and beyond.

Then California's Ruko steps up. You'll know the name from releases on labels like Playside 175 and from Ramp Up's NHS charity album, so his take on the 'Output' stems is hotly anticipated. He strips back the percussion to expose the grimy underbelly of the bass, finding a a seething low-end turbulence in the sound that's going to hit dancefloors hard across all corners of the scene.

Finally, Slix, one of Ramp Up's founding fathers, takes control. And he's here to flex. Dissecting the bassline into its component parts to deliver ever-evolving motifs and sequences, juxtaposed with a precision-tooled two-step, he's kept the soul and essence of 'Output' intact while changing virtually everything around it. A dub-influenced junglist's ear for mixdowns is in evidence, and Slix is clearly setting out his stall as a producer to watch closely.

So these are the 'Output' remixes. The original might be nearly a quarter-century old but good music is future-proof, and these new reworks mean that this EP is going to find a home wherever good drum 'n' bass is appreciated. Heavyweight.