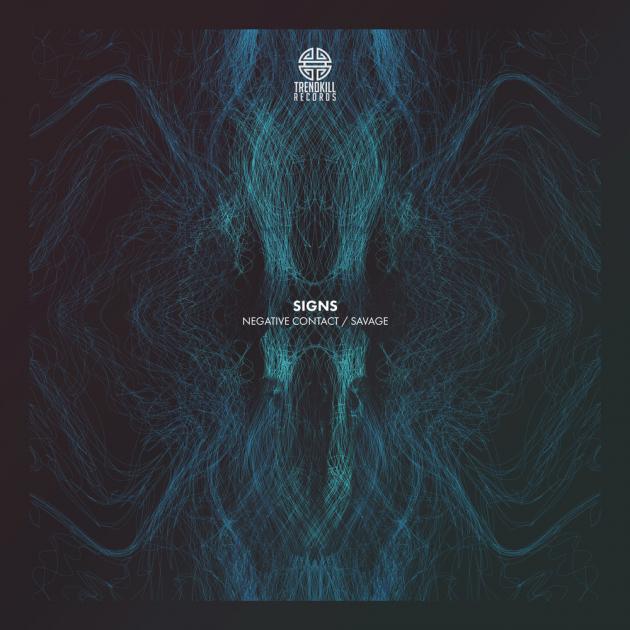 Lead by drum & bass veteran Prolix, UK based record label Trendkill have been closing in on the dance music market with a host of releases which demonstrate their head honcho’s A&R flex. Following a set of groundbreaking releases this year, they make a comeback alongside trio Signs, who’ve already dominated the back catalogues of many well-respected labels. However with the help of Prolix, they’re set to continue their path, from their roots in Toulouse to one of London’s most pivotal underground labels, especially within the scene’s darkest dominions.

Having made their mark on the likes of Noisia’s Division Recordings, Red Light Records, Bad Taste Recordings and C4C, as well as featuring on massive label compilations, from Ram Records and Eatbrain; their diversity is clear through their output. ‘Negative Contact’ and ‘Savage’ pedestal this artistry and the double-sided single presents an expertly crafted delivery for Trendkill’s back catalogue. A-side ‘Negative Contact’ creeps into life with slowly rolling, metallic Sonics and a Bassline which begins to make itself known amongst the mix following its foreboding intro. Smacking drum rhythms then come into play as the record drops, pulling you along for the ride and helping to create a driving motion which smashes through each layer with the upmost precision. Manipulated bass sounds are channelled through the composition and it becomes clear that Signs are here to make themselves heard.

And ‘Savage’ is the reverse, just as biting and lending itself to its title with crashing snares, rumbling subs and a groove which takes hold between every snapping segment. Once again, Signs leave no prisoners as they go in for the kill and the track lends itself to Trendkill’s already impenetrable roster. The record is loud, heavy and is likely to rattle club speakers, providing the perfect explosion within any set, especially with the impending festival season and their Let it Roll set just over the horizon. Trendkill have forged another release which will reaffirm why they’ve stayed ahead of the game since their beginning, something which is set to remain the same whilst they release music from artists of the same calibre.