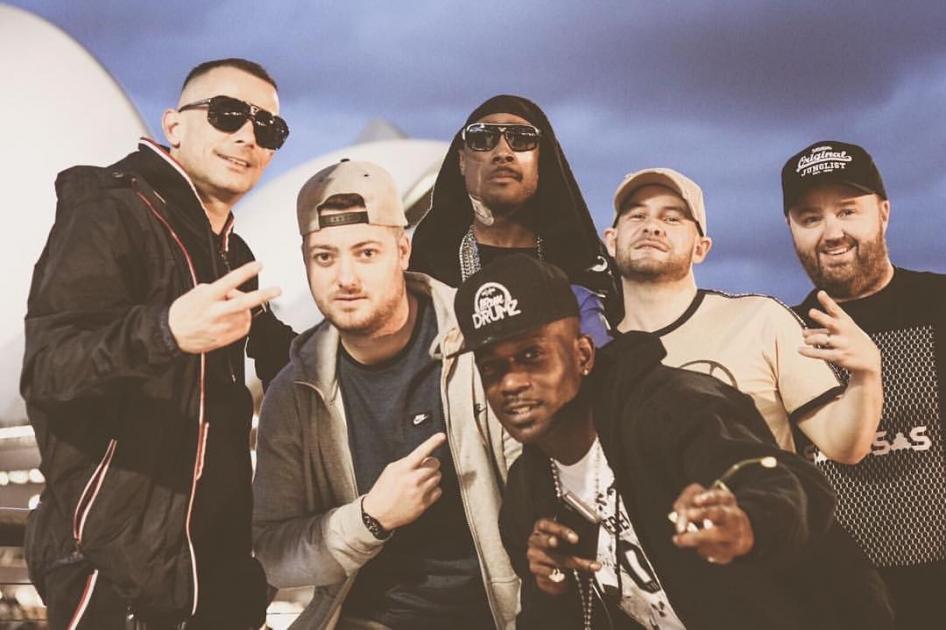 SASASAS: “LONDON, LONDON, THIS IS WHERE DRUM & BASS COMES FROM!...”

We caught up with Phantasy and Harry Shotta from drum & bass powerhouse SASASAS to discuss their recent Australian tour, London, new music and most importantly ask them what we can expect from their debut performance at SW4 this summer!

What’s been going on in the world of SASASAS?

Phantasy – We toured Australia and that was just mad! Given the success of this toure, there’s already talks about us going back in March to do New Zealand as well, like a massive 10-day tour. How crazy was Australia Harry?!

Harry – I’ve been before but the difference this time, especially in Perth, the levels of fans out there and support for what we’re doing is just incredible. They knew all the lyrics, they knew all the tunes, they were humming and singing back the tunes. The response was more like a concert instead of a rave. It was a proper fan vibe over there, it’s mad to see it like that when you’re so far away from home. We’re just all over the festivals and the club gigs at the moment. It’s just spread like wildfire really, I mean I always said if people actually get a chance to see what we do outside of the usual environment, they’ll warm to it and enjoy it and that’s what’s happened when we’ve gone to places where you wouldn’t usually expect to see us. Everywhere we go we’re breaking new grounds and smashing the stigma that people might attribute to the more MC led side of drum & bass, it’s all been really positive.

There’s no denying that you guys are one of the most in demand drum and bass acts right now. Can you just explain a bit about how SASASAS came to be?

Phantasy - The beautiful thing about it is, we’re 6 friends that came together to do a one off set and I remember we had about 3 gigs that night, Harry had to play far away and what we had to do was play from 5:15-6 in the morning, I don’t really like playing that time because everyone’s usually tired by then and our sets are really high energy. I just remember how rammed the place was and the anticipation for this set. Afterwards, the feedback online was just crazy and it was just that natural progression, it was six friends who are artists in their own right basically coming together to create something special. The most beautiful thing about this is that it’s been organic, it’s not been forced and it’s grown naturally. If you look at us on stage, we’re on there, we’re smiling, there’s even been times where Shotta has jumped on the decks and played tunes and I’ve jumped on the mic, we just have fun! We give that energy to the crowd and they give that back to us.

I know most of the group are London born and bred, can you tell us a bit about your past experiences raving in the capital?

Phantasy – Well Shabba’s got this lyric which is like “London, London, this is where drum & bass come from…” and the beautiful thing is that drum and bass and jungle music goes right back to the early rave days and it’s music that we made right here in the UK and then exported worldwide. People come from all over the world to come to London to experience the genre. When we did our Fabric show, there were people all over, this one girl flew in from Switzerland just to come for the show, it was mad.

You’ll be making your debut at SW4 this year! Are you excited to be joining us?

Phantasy - We’re absolutely buzzing to be at SW4, we’re very aware of SW4 and what it means to festival life in London. We’re excited to be on the line up and we’ve had so many people message us on social media both publicly and privately saying we can’t wait to see you there. When the talks first start happening and the guys knew we’d been booked for a major London festival, Shotta was like “Oh my god is it SW4!?...” everyone was excited but I was like please don’t say anything as nothing was fully confirmed. But when you did announce that we were there, oh my god, I suddenly had a load of people coming out the wood work saying “we go there every year, sort us out guest list would ya..” and I just laughed and said you better get your tickets while you still can!

Harry – Loads of my friends go every year and they love it because they’re proper in to their house music as well so when I found out that we might be booked I was gassed! Because although I’ve never been as I say all my mates go and it’s like the highlight of their year, it’s a big date in the calendar.

What can we expect from your set at the festival? Any exclusive material that we can look forward to?

You’re performing in the Playaz arena, which will be the first time the label has ever hosted a festival stage. Can you tell us a bit about your relationship with the Playaz camp?

Phantasy – Hype is like my brother, he’s the godfather to my daughter, that’s how close we are, he’s one of my closest friends in the business. Although just because we’re friends he doesn’t just book people based on that, he’s a business man first and foremost. He sent me a message when we were off to Australia saying he’s so proud of what we’re doing and were representing drum and bass. He’s also good because he’ll be honest with you, he’ll tell you if somethings bad. He’s a strong believer that if everyone’s doing well, then that means the scene is doing well. I can’t speak highly enough of him and I think it’s great that he’s able to bring a Playaz stage to SW4. But you know what, next year when SASASAS are hosting a stage we’ll be booking him! Hahaha

How are you feeling about the current state of drum and bass music?

Harry – Drum and Bass is exciting right now because there’s so much new talent coming up, rising into the ranks. Producers are bringing new sounds to the table like Macky Gee, Dominator (RIP), Annix and Turno, they’ve brought fresh sounds to the scene. There’s also been a rise in MC’s bringing in new flows but you’ve also got the legends still killing it bringing new cutting-edge styles. Some of the MC’s now, they sound like grime MC’s. They’ve been influenced by drum and bass, but also grime stars like Wiley and Kano. Drum & Bass right now in 2017 just sounds fresh to me.

Is there anyone on the Playaz stage that you’ll be sticking around to see? Have you had a chance to look at the line-up?

Harry – I always love to check out Hazard’s sets, he’s an innovator and he’ll bring out tunes that redefine the game. He is someone that I fully respect and always enjoy working with. When he does a new single or EP, there’s always something that kicks you up the ass a bit again.

Phantasy – You also can’t forget legends like Fabio and Grooverider. It’s brilliant to see they’re still smashing it. We love Camo and Krooked, we love Netsky. Friction… when you look at that line-up it’s just crazy. And you know what I’ve got to big up Mu New Leng because they hit us up for Drum & Bass tracks and I saw a video of them playing ‘Let It Shine’ by myself and Macky Gee and the whole place erupted! And I was re-tweeting it and getting all gassed about it online and Hype hit me up and said “You’re getting a bit excited about that..” and I was like yea it was at your event! It was recorded at the Playaz Easter bash at Electric Brixton.

Any upcoming SASASAS projects or releases that we can look forward to?

Phantasy – We have got some stuff that we’re working on at the moment. There’s something I really wish we could tell you about right now but we can’t say anything just yet. If it happens, it’ll be a really good link up. We’re always moving and doing things, regular meetings to keep things moving.

Harry – Definitely expect an EP at the end of the year with some interesting collabs, even though as Phantasy said unfortunately we can’t talk about them just yet. But if they come off it’s not only going to be a good look for us but for the drum & bass scene in general…