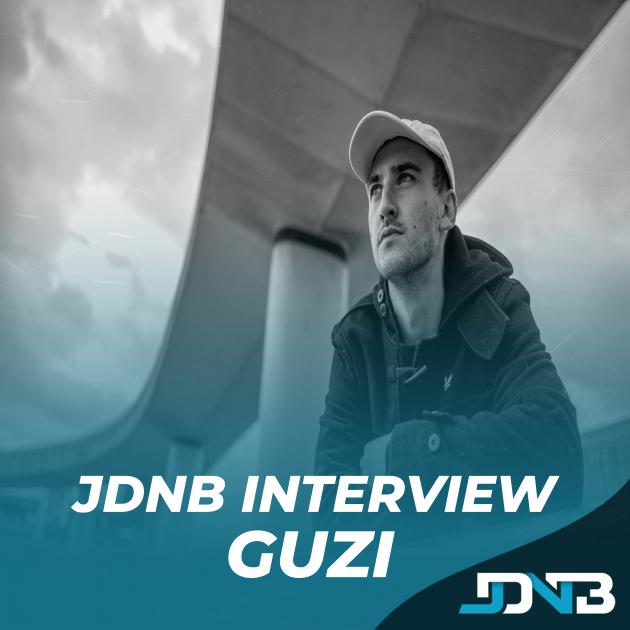 London-born and hailing from the seaside bass haven of Brighton, George Hughes aka Guzi has been turning heads, moving feet and captivating minds with his sharp, eclectic brand of drum & bass sonics, excelling on all levels and in every medium he puts his multi-faceted mind to.

His pristine touch as a producer, selector and tastemaker has cemented him as one of the go-to purveyors of 170+ greez, working across a plethora of sounds and sub-genres along the drum & bass and jungle spectrum, highlighted by the successful releases of his ‘Ooh Boy’ & ‘Get Some Juice’ EPs, both of which shot to the number 1 spot on Juno Download. Standout cuts from his back catalogue, including the deep, pulsating vibrations of ‘Kushty’, the cascading breakbeats of ‘Stavro’ and aforementioned wobble-fest ‘Ooh Boy’ have cemented his status as one of the go-to artists in underground DnB, as have acclaimed remixes for the likes of DJ Hybrid, Conrad Subs, Warhead, Euphonique and more. Widespread club, radio and press support has followed from Grooverider, Randall, Serum, Grooverider, Benny Page, Ed Solo, Spectrasoul and many more.

On the buttons and in the rave, his selection is truly second to none, playing b2b with frequent collaborator Agro at Switch! Vienna, and rolling out on a solo flex at Equinox Festival, Bassment Huddersfield and more, as well as playing an essential role as a key resident at Sub-liminal’s immensely popular Volks residency.

But, that’s not all that meets the eye for the 26-year-old trailblazer. As well as his sustained success as an artist, he also splits his time as a tutor, teaching and assisting the next big things in electronic music at the legendary Nomine aka Outrage’s scene-leading Education & Bass platform - being handpicked by Nomine is yet more proof of Guzi’s stellar reputation and know-how. As a coveted mixing/mastering engineer, he’s mixed/mastered over 3000 tunes for clients such as Sub-liminal, Nuusic, Bowlcut Beats, Liondub and Random Concept, whilst also overseeing operations as label manager of Sub-division Recordings & Section 63 Recordings.

And, the best is yet to come. December 21’ will see Guzi release his finest work yet in the form of his self-titled, eponymous debut album, forthcoming on Agro’s essential Sub-liminal Recordings imprint. Featuring a metric tonne of rupturing, diverse solo material and a strong cohort of collaborations with the likes of label boss Agro, DJ Hybrid, Sam Harris, Stillz, BP MC, Madrush MC, Peggy Sewage and Style One, Guzi is rounding out the year with a bang, and pushing on even further into 2022.

JDNB talks with Sub-Divsion & Section 63 head honcho Guzi. We discuss his upcoming debut album, go into depth about all things education & bass. Plus we touch on a few essential production tips, some must have plugins for your studio and how you can take your music production to the next level!

First of all, thanks for taking the time out to talk with us. Tell us a little about yourself and what you've been up to?
Big up! For the last year or so the majority of my time in the day is spent working at the studio. I am blessed to be very busy pretty much all year round, so other than spending time with my family, there isn’t much time for anything else these days! Whenever I do clear my work load, I try to get an idea rolling for my own music.

Let’s start with the tutoring side of things. We hear you're one of the go to engineers for mixing and mastering, and in depth production lessons. Wicked stuff, tell us what you offer for someone looking to gain fresh insight or learn the latest techniques?
My private tuition is really catered to each individual that comes to me wanting to learn. No two producers have had the same lesson. I always start by listening to the students' music & discussing with them what they feel they want to work on. Off of the back of that conversation I can get a pretty quick grasp of how I can help them improve as much as possible in a short space of time.

So, any skill level can get on board?
I have had people come through for a lesson that have never opened a DAW in their life, I’ve also taught people that have been producing and DJing for longer than me & everything inbetween. I believe no matter what skill level you are at, there is always something new to learn in music production. 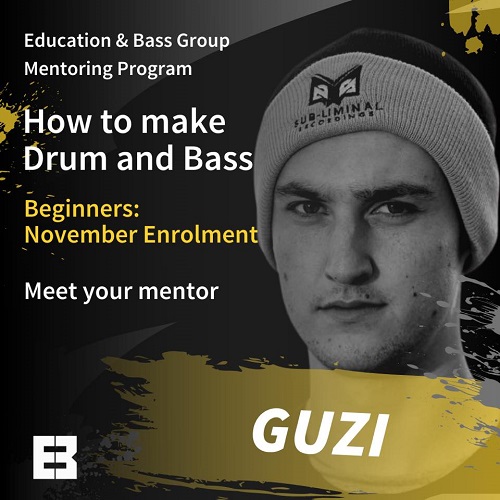 Tell us about your mentoring work over at Education & Bass, we hear the platform is one of the best in the business?
Education & Bass goes above and beyond for its students when it comes to providing a quality educational platform. As well as the existing content and the option for 1-2-1s with some amazing producers, E&B has also recently launched group mentoring sessions for both drum n bass & dubstep producers, and so far they have been a great success. I just wish these courses existed 10 years ago because it would have saved me a lot of trial and error whilst learning. Being able to learn directly from the likes of Nomine & Digital is a great opportunity.

Let's talk studio. What are your top 3 pieces of analogue hardware?
My thermionic culture purple bustard is by far my favourite bit of hardware. It is a valve summing mixer and it just sounds amazing. This bit of equipment is the main reason my analogue masters have proven so popular, it just makes tracks sound so much more alive.

Sticking with mastering hardware, I would be lost without my Dangerous Bax EQ, so that has to come in at 2nd.

Last but by no means least, my Behringer Model D. I haven’t really used it for a while, but it played a big part in creating the bass sounds in some of my earlier tracks that cemented my position in the scene.

What plugins wouldn't you be without?
Oeksound soothe 2 - if any plugin is capable of ‘polishing a turd’ it is this one

NI Massive - I have loads of synths, but I still often find myself reverting back to the original massive, it was the main go to synth back when I first got into production around 2009/10 so its just something I am very comfortable using.

If you could pick 3 essential techniques for the budding producer to go and learn now, what would they be?
Start off by perfecting the simple things, like cutting a break up and making a catchy bassline with just a sine wave, then build on that

Let's discuss the LP. Give us a little insight, just how much work goes into a project like this?
It’s a bit of a tricky one to answer. Some of the tracks on this album were written over 3 years ago, some more recently, but it’s not like I’ve been constantly working on the album for 3 years. I kind of just had the thought in my head that an album was my goal, but I tried not to force any of the tracks, I had to wait until inspiration struck.

In your own words sum up the sound, what can we expect?
A wide variety of drum & bass. I love the majority of sub genres that fall within dnb, so this album is a representation of the vibes I like to listen to and play myself. There should be something for everyone in there! 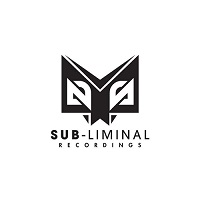 There are some serious collaborations with the likes of Hybrid, Agro, BP & Madrush MC, Sam Harris, Stillz, Peggy Sewage, and Styleone! Describe your experiences working with such a sick melting pot of UK talent?
Working with such talented producers and MC’s has been great. I personally find it way less stressful collaborating compared to working on my solo stuff. Each collab was a slightly different creative process as everyone works differently, but I am really happy with the features, they are all artists I respect on both a personal and musical level.

How long did it take to wrap it all up?
I pretty much had it all ready over a year ago but there were 1 or 2 tracks not quite sitting right with me. I also didn’t want to put it out during covid because I make tracks for people to dance too. I gave myself an extra year to revisit some of the tracks and also I just wanted to sit on them for a while. These days a lot of people are churning out an EP every single week without much thought going into it. I sat on these tracks for years and still love them, so I know they are the right ones for me to release.

Across the LP Guzi manages to cover all styles and sub genres, from greezy jump up tracks like ‘Cold Nightmare’ and his remix of Agro’s ‘Ruff Ride’, to uplifting floaty vibes with ‘Aerosphere’, he goes on a darker rolling tangent with Fizzy Strawbs, you'll find trippy rave stabs galore in ‘Wipeout’, 'Eyes Turn To Black VIP' is a spine tingler, there’s roots inspired numbers like ‘Moschino Jeans’ plus heavy laden breaks & bass in ‘What To Do’, and to be honest with you, that’s just what we like to hear!

We think the album is a serious entry into Drum & Bass as a whole! But don’t just take our word for it, you can check out exclusive premieres of ‘Cold Nightmare’ and ‘Moschino Jeans’ dropping on the JDNB Soundcloud ahead of release! 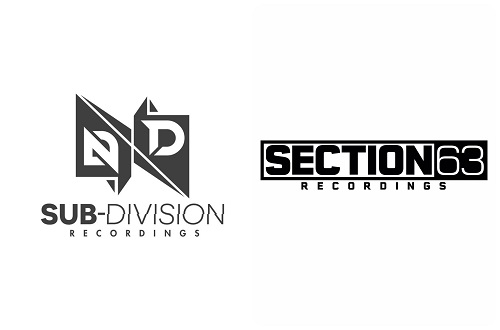 Guzi manages Sub-Division and Section 63 respectively. We want to know what's happening! Any emerging talent to be on the lookout for?
On Sub-Division up next we have our 3rd volume of The Division VA ep series. This is one of our strongest releases to date and introduces a few new names to the label that we will be seeing throughout 2022. Ominous ‘Turn Up’ has proven to be a particularly big hit from this release, I have been dropping it in my sets for a while and it’s one of those tracks you can double drop with almost anything and it’ll bang!

As for Section 63, we have just released an EP for the late, great JDizz who sadly lost his life earlier this year. He was an amazing up and coming talent and it has been great to see the support his music has been getting, keeping his legacy alive.

Any events to be on the lookout for? Where can we catch you playing next?
At the Volks! It is my favourite venue in my home town of Brighton, my next gigs are Sub-liminal on the 20th and then the midnight massacre on the 24th (November). 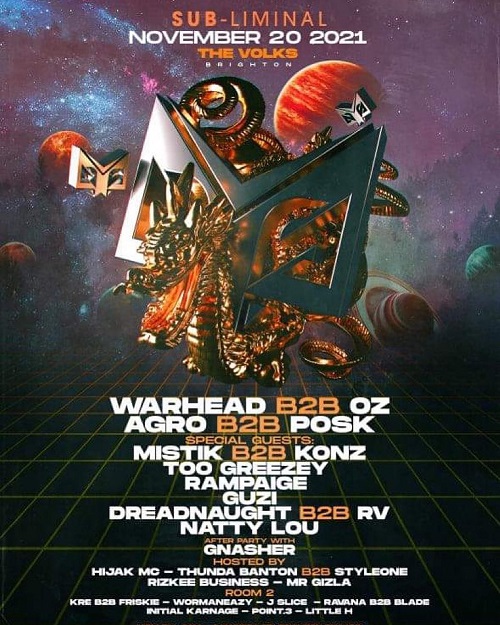 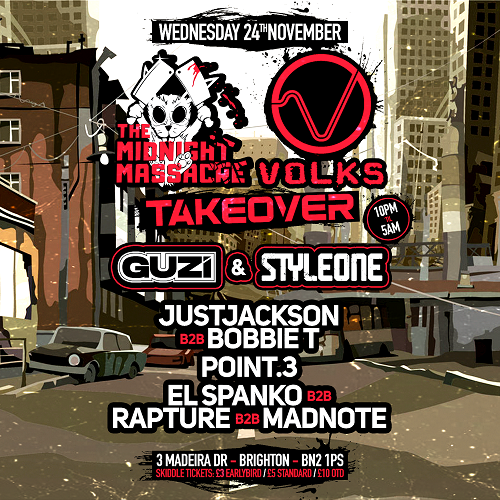 Tickets for The Midnight Massacre

What else can we find you doing when you're not in the studio?
I love cooking. I think if I didn’t end up doing music, food may have ended up being my creative outlet to escape the mundane corporate office life. I am also a lifelong Arsenal fan so I try not to miss a game if it’s on the TV!

Thanks for chatting with us! Any shout outs or dedications?
Shouts to Agro, the entire team at Education & Bass & all of the artists making music for Sub-Division / Section 63 - too many too name!