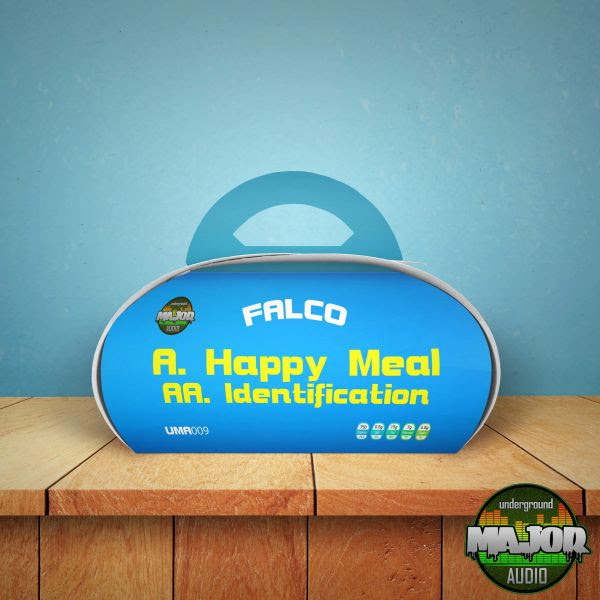 Continuing to demonstrate their attuned radar for emerging talent, London’s Underground Major Audio have hand-picked a star in the making for their most high-profile signing to date. Introducing Falco, the ascendant young Dutchman whose past releases on labels like Dubstomp 2 Bass, Fearless Audio and Nuclear Bass have already led to support from decorated DJs and an appearance on Spotify’s hugely popular Bass Arcade playlist. Although first making a name for himself with his jump up productions, the acclaimed youngster has recently taken to the darker side of drum and bass, as can be heard on his upcoming debut two-tracker on UMA, “Happy Meal” / “Identification”.

Featuring humorous spoken-word samples akin to the dialogue you’d hear at a drive-thru, “Happy Meal” is one of the 21-year-old producer’s most light-hearted tracks to date, but nonetheless packs a formidable punch. Swelling pads, clattering percussion, knocking, vibrato-tinged subs and rugged basslines come together, making for a simultaneously heavy and minimal number, perfectly aligned with the sound we’ve come to expect from UMA since the label launched last year. Meanwhile, “Identification” is an altogether breezier affair. Greeting the listener with snappy percussion and skittering staccato synth stabs, the syncopated track soon erupts into an abrasive drop centred around snarling basslines and fleeting vocal hooks. The song is bound to remain in listeners’ minds thanks to its strong rhythmic component and forward-thinking instrumentation, its distinctive swing giving the bouncy stepper a quality unlike anything we’ve heard on the label up until now.

“Happy Meal” / “Identification” can be found exclusively on Juno Download from 9th November, arriving at other retailers and streaming services a week later on 16th November 2020.