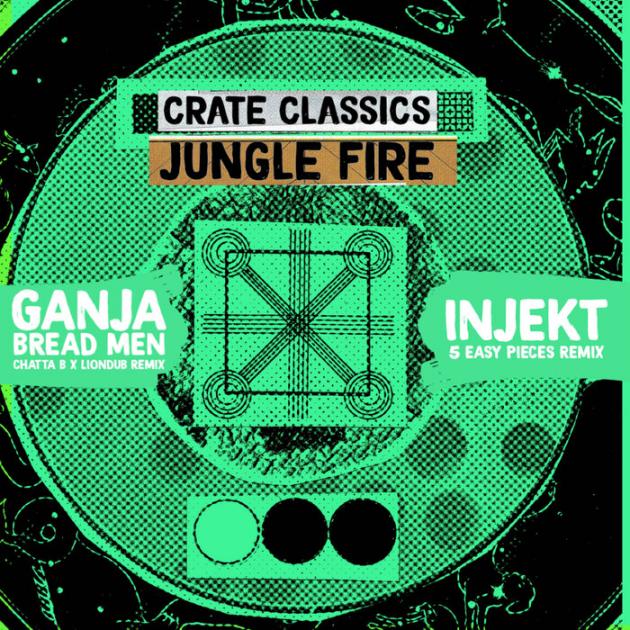 The unstoppable Crate Classics are back with yet another 2021 music drop, in what has been a hugely prolific year for the London D’n’B duo. This time they’re passing the torch to none other than the UK Jungle music legend Chatta B, along with friends Liondub and newcomer 5 Easy Pieces who have offered remixes of the Crate Classics tracks ‘Ganjabread Men’ and ‘Inkject’, pulled from their Jungle Fire trilogy EP’s released earlier this year.

Collaboration has always been a pillar of the UK Jungle scene, and the Crate Classics boys had been looking forward to hearing fresh interpretations of their tracks. Speaking on the remix process, Jamie from Crate Classics had this to say:

“After dropping the Jungle Fire Trilogy we wanted to remix some of the tracks… First on the list was Chatta B from the iconic label Kemet Records. He’s known for blending heavy Reggae Dancehall style with Rare Groove over breaks and bass so we thought "Ganjabread Men" was the perfect track for him. He’s a legendary figure of the Jungle scene so it’s an honour to have him grace the label with this gem. Chatta brings his signature sound to the remix alongside New York based producer Liondub. 5 Easy Pieces and Crate Classics go way back. We are buzzing to have his first production on the label”

Chatta B is one of the pioneers of the Jungle sound. Starting out in 1992, he helped form the seminal Jungle label Kemet Records with Mark X, releasing a string of tracks alongside Potential Badboy under various aliases such as Noise Factory and Brock Out Crew. Chatta's influence can be heard far and wide, most recently having had his track ‘Bad Man Tune’ featured in Aphex Twin’s live sets.

Liondub, is an American DJ, producer, and Record Label owner who specializes in jungle, drum and bass, reggae, dancehall, hip hop and dubstep. He began his music career in the early 90’s, playing Reggae and dub music in New York City. He was introduced to jungle music in 1995 after a trip to London and hasn't looked back since. Known for a unique blend of American Hip hop, UK Jungle, and Jamaican Reggae Dancehall, Liondub quickly became renowned for his exclusive dubplate driven sets.

5 Easy Pieces is the mysterious West-Midlands newcomer, this being his debut release for Crate Classics Records