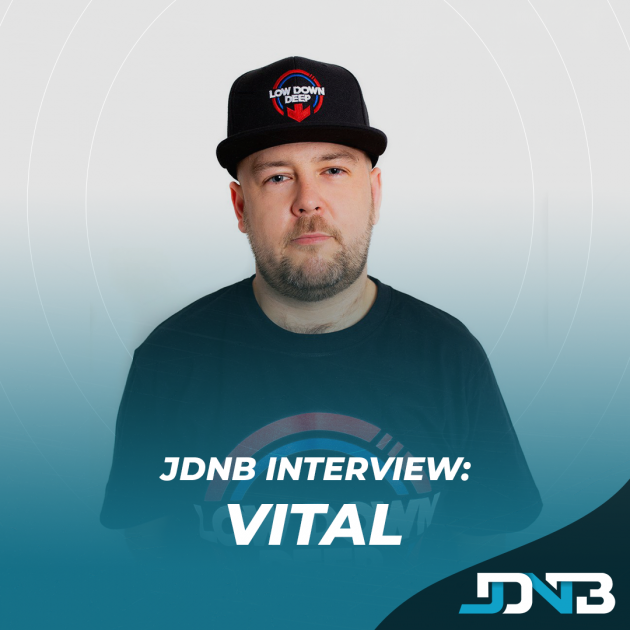 Vital has cemented his name into the drum and bass scene with recent releases on Murky Digital and an album forthcoming on Low Down Deep.   Playing shows all around the country and internationaly, his fan base has been growing at a soaring rate, gaining praises from all the vets in the game,  With his name turning heads for the past three years, we thought it was a good time to have a chat with him:

Thanks for talking to us here at JDNB.  How have you kept yourself busy during the Lockdown period?

My pleasure, thanks for having me. Haha I’ve been going a bit mad, I can’t lie…. But I’ve just been concentrating on making music and trying not to be too glued to social media as there’s so much depressing shit going on.

How would you best describe your production style?

I simply just make music I like. I like the rolling sounds but jump up is where my heart lies and I strive to develop my sound to compliment both sounds. The fact anyone actually likes my music is just the icing on the cake.

Who would you say has inspired you to get into production?

My main inspiration comes from a range of artists but mainly DJ Hazard, Original Sin, Ego Trippin' and the best to ever do it; Dominator (R.I.P)

Where did you get the inspiration for your latest EP 'Termin8' on Murky Digital?

The main inspiration for the project came from the track Termin8. It had that perfect balance of grot and weight with harder, more aggressive sounds as well as a deep, rolling baseline and I instantly knew where it was going! Murky Digital is really leading with that vibe and it all fell together under Elsta’s guidance. The other 4 tracks are a bit of a showcase of my own interpretation of that sound but from different approaches; with touches of tech, jungle and jump up all mixed together with lots of rolling flavours.

You did a remix of Dominator's (R.I.P) track 'Think First' with Mass for Low Down Deep, how did that come along?

That was a massive opportunity for me and Mass and it was a bit surreal actually doing it as we both love Dominator (R.I.P). Originally it was just meant to be Mass developing the remix but he asked me to get involved and the rest is history, haaaa.

Before you got signed to Murky Digital, you had earlier releases on Bulletproof Records and Clawhammer Records, how would you say they helped you develop your sound?

Those guys gave me complete productive freedom to really explore my sounds and it gave me a perfect platform to identify what tracks people liked from me.

What does Vital like to do in his spare time?

I’m a simple guy to be honest lol; I love food and I’ve always been a big smoker but I;m cutting it all down and trying to knock it on the head to fully focus on music.

You're stuck on a desert island and have two records with you, 1 dnb and 1 non dnb, what are they and why?

Haha I fucking love this question! So, my D&B record would have to be ‘Ebony Dubsters – Power of Rah and my non-D&B would be anything by the Pharcyde, I love my old skool, real Hip-Hop. You’ve probably heard little cuts and samples from that sound in a lot of my music….

What do you find is the most challenging thing when making your music?

When making my tracks I usually struggle with snares the most; it’s not that they don’t sound good, it’s just I find it so fucking hard to pick, producer problems…

My studio is reasonably simple. It’s just 2 monitors, an audio interface, a laptop, plenty of software and a mic.

Who would you love to colab with and why?

If I could ever just pick to do a colab with someone and it would happen, it would have to be hazard! He is a god to me. I’m also really feeling what Bou is doing currently so that would be sick.

Any tips for aspiring djs/ producers looking to get into the scene?

All I can say is, be fresh. People will always find a way to hate and be negative but you have to stay determined and plough through because for every hater you’ll get, you’ll find 10 people that love what you are doing!

What has been your biggest gig to date?

My Breakin’ Science debut at the 02 in Islington with Skibba, absolutely crazy vibes. I was so nervous before but the set went off and the crowd was incredible!

Tell us a little about your plans for the future and are there any new tracks we should keep a look out for from yourself?

Plans for the future are to just keep working away, refining my sound and trying to be the best I can be. Working with Low Down Deep for my jump up and Murky Digital for my more rolling tracks. I have my debut album coming out on Low Down Deep and I’m seriously excited for it!

What do you love about the www.jungledrumandbass.co.uk website the most?

Thankyou for your time, lastly any shouts or thanks?

Just want to say thanks to everyone that supports me and my music, to yourselves for having me, to Logan D at Low Down Deep, to Elsta and Bass Antics at Murky Digital and to everyone close to me.

'Termin8 EP' is out now on Murky Digital via the following links: Juno / Beatport

Edited and posted By: Chilla