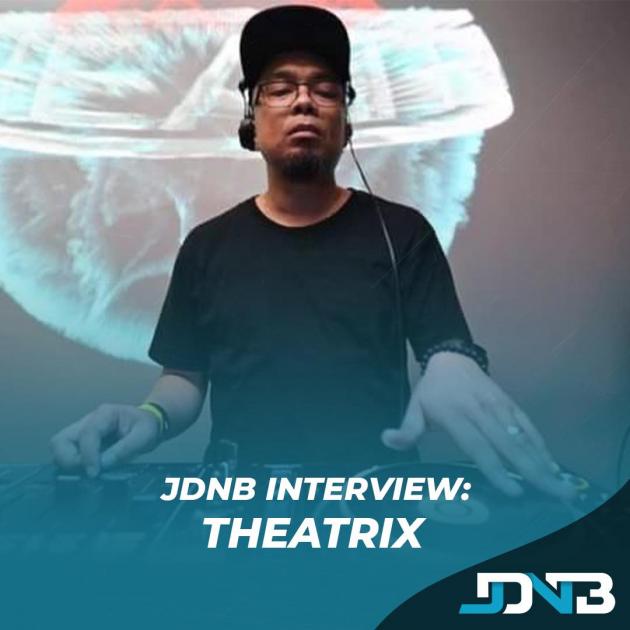 Drawing heavy influence from his background in the theater, Theatrix has developed a unique perspective on drum and bass which has set him apart from his peers. Having cut his teeth as both an actor and sound designer in the theatrical space, he approaches production and performance as a consummate professional with a heavy focus on storytelling and dramatic tension.

In 2018, he and his wife founded Divination Records - his debut imprint. Divination not only serves as a platform for his releases, but also a platform to develop new talent in a way that honors the most respected artists that have come before.

Theatrix has released on Viper Recordings, YANA Music, Beats In Mind, and Stand Together.  With another release available now on Yana Music alongside the amazing vocal talents of Sofi Mari entitled ‘Queen’, we thought it was time to get to know Theatrix.

Coping is a strong word but I guess I’ve been using this time to write tunes and jokes.  Sometimes I play video games or watch TV with the missus.  Anything, really, to keep my mind off the social collapse we’re experiencing.

Tell us a bit about yourself and where you come from?

Originally from Honolulu but now residing in Los Angeles.  Before I was involved in drum and bass, I was working as an actor and sound designer in the west coast theatre scene.

I listened to a lot of grunge, metal, and hip hop in high school and got into jazz and big band shortly after we moved to the mainland.  I caught a bit of the big beat and trance thing shortly before taking off for college but didn’t really get into raving until later.

What's the jungle, drum and bass scene like in LA?

Considering the world effectively ended about 18 months ago, I’d say the scene out here is fairly healthy.  Respect has been having packed shows every week since reopening, Bassrush is bringing out Nero to Exchange in a couple weeks, and a whole slew of promoters doing their thing so it’s fairly easy to find something dnb related to do.   On top of all the shows, there’s a ton of talent here that’s making their mark in the dnb world.

Jungle is a state of mind and drum and bass are the tools we use to express it.

You have your own label too right? Tell us more about that?

Yeah I run Divination Recordings with the missus.  We draw heavy influence on the occult for our promo and sometimes in the thematic elements of our releases.  Our most recent release was my Technomancy EP and upcoming we have a beautiful liquid track from Dutch producer Toss-T which should be out mid September.

Your latest release ‘Queen’ on Yana Music features the amazing vocal talents of Sofi Mari. How did this linkup come about?

Originally the tune was an instrumental with a cheeky sample from Coming To America but after I sent it to Christian (Toronto is Broken) the idea of putting a vocalist came up and we started looking. Eventually the tune got to Mel at S2k and she linked Sophie and I up and now here we are!

It's not your first outing on Yana either is it? Your track ‘Dusk’ featured on the Yana2020 unmixed compilation.  How did you originally get your tracks signed to the label and what was the feeling like on release day?

Honestly I think I just kept harassing Christian until he agreed to put out a tune of mine. Dusk was a tough one to find a home for but glad it ended up where it did.

Having a couple tunes signed to Viper was pretty cool especially considering it was pretty early on in my production endeavours.

Getting to open for both Chase & Status and Black Sun Empire on the same night at The Avalon was a huge honor.  Didn’t even know I was on the promoters’ radar and yet I landed the spot.

Aside from DJing and Production, I spent some time as a booking agent and am quite proud of the work I did there.

I’m an Ableton on PC guy and do almost everything in a box.  I run an i7-9700 with 32gb of RAM into a UAD Apollo Twin with a UAD Satellite Octo for DSP support.  For graphics I’m using an Nvidia RTX 2070 super.

My favourite plug in at the moment would probably have to be the Avalon VT-737 channel strip.  So much control and so many possibilities in one plug in.

Who are your top 3 stateside dnb producers right now and why?

In no particular order, I’d say Dr Apollo, Airglo, and Justin Hawkes would be my 3 stateside pics.  All 3 have been crushing it sonically and all 3 play very memorable sets that are diverse and keep the crowd moving.

It rdepends.  Sometimes inspiration could hit from playing video games. Sometimes it could be something we’re watching on TV. Sometimes a riff will just come to me out of nowhere and I’ll end up singing to myself like a crazy person until I get a chance to lay it down.  No telling where inspiration comes from so I try not to rely on it and just try to get in the studio at least a couple hours a day regardless of whether or not I’m feeling inspired.

If you could remix one track from Yana Music, which one would it be?

Umax – Through the Clouds

Umax – Through The Clouds

I’m currently working on tunes with Sammie Hall, Camo MC, and Gracie Van Brunt at the moment and would love to get those into good homes.  I’d also like to land some official remixes for some pop acts and maybe get some sync placements.

I like how you have an events section on the front page.  Wish we had a site like this stateside that was a viable promo outlet for promoters.

Thanks to Christian for giving my tunes a home and putting up with my shit!  And a huge thank you goes out to Sophie for lending her amazing voice to the tune!