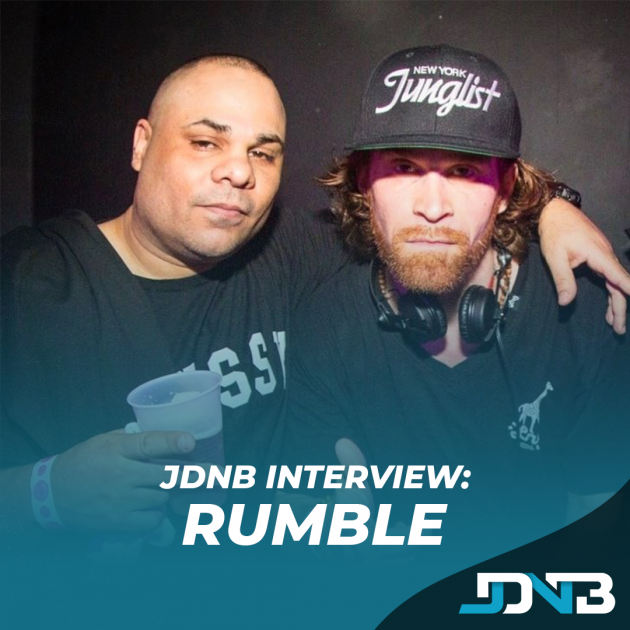 Marcus Visionary and Liondub have been busy lately preparing new projects for New York record label Liondub International.  Having worked together since 2008 when they founded the label, they both thought it was time to put their heads together and release tracks as RUMBLE.  The seventh release see's them going back to their 2017 hit 'Gyalis' to give the  original a little revamp, as well as inviting along some friends to do some remixes.  Prepare yourself as Rumble gear up to push out more Reggae and Jungle Bashment heat very soon, but in the meantime we had the pleasure to catch with them to ask a few questions:

Marcus:I’ve been doing alright.  Keeping myself busy in the studio.

Liondub: Maintaining, thanks. Rolling out radio shows, working hard in studio preparing new Rumble projects as well as taking care of the day to day for the label.

So what made you both get together and form Rumble?

Marcus: Lion and I have been working together on the label for over 10 years now.  We’ve always talked about doing a collaborative project.  We both come from similar backgrounds musically so it just made sense.  We’ve also both wanted to work with many of the same singers, mc’s & artists over time.

Liondub: Marcus was one of my favorite ragga jungle producers, and i always loved his music, warm sound so, after years of building on various label projects the opportunity to work with him in the studio was something I was very keen to do.

How long have you both been producing for, and where do you get your inspiration from to make music?

Marcus: I started learning in 1995. Wasn’t until 2004 that I decided to take it more seriously.  My inspiration comes from digesting all styles and flavour of music.  I’m a sponge and I love fusing different genres together which works well with Jungle.

Liondub: I started producing seriously back in 2000, most of my inspiration came from working closely with Reggae and Hip Hop producers and watching them create, but in all honesty i always just wanted to make edits and remixes for my dj sets.

Which track would you say first got you both into jungle / drum and bass?

Marcus: For me it would be the early Rebel MC stuff like his track Humanity.

Marcus: I’m all in the box with a fully loaded PC.  I currently use Cubase 005 as my DAW.

Liondub: Im using Logic Pro X with a very old, but stable mac pro. Yamaha HS5’s and HS7’s for monitoring, a Universal Audio Apollo and a few bits of choice outboard gear like a EL8 distressor, moog slim phatty, an original RE-201 space echo plus great river and pendulum pre-amps. DJ Setup is all Pioneer (DJM900 NXS2 / CDJ2000 NXS2) and i use Serato DJ on a macbook pro laptop.

Do you have any gigs coming up or live streams where people can hear or see you DJ?

Liondub: I am live on Kool London every Super Sunday after DJ Brockie from 6-8 EST 11-1 GMT on www.koollondon.com and i also do a Reggae Dancehall show alternating wednesdays on Kool at the same time slot as above.

Marcus: Currently no but I have my Kool London show the first Friday of every month from 6-8 EST 11-1 GMT on www.koollondon.com. Taking a little break on the live streams to focus on the studio.

What do Rumble like to do in their spare time away from music?

Marcus: Lately I’ve been trying to spend as much time in nature.  Especially since we’ve been locked up in the house with lockdowns.

Liondub: Spending time with my family, cooking, and repairing, upgrading and maintaining my home and garden.

What would you say has been your biggest achievement so far within the jungle / drum and bass scene as Rumble?

Marcus: For me personally it was getting a feature in the Jamaican Star for our Printa Riddim.  It was our first Riddim LP embraced by many across the globe. Read Article Here

Liondub: I would have to say being able to work with all of the artists from the UK mand Jamaica on our projects has been a major achievement. Artists like Ward 21, I Octane, Gappy Ranks, Stylo G, The Ragga Twinz, Spyda, Top Cat, Demarco, Konshens, all on our Rumble riddims is wild.

Your recent release on Liondub International ‘Gyalis Remixes’ Feats Mr Lexx and Suku Ward.  What initially brought you all together to make this track?

Marcus: I was coming to NYC to collaborate with Lion to create some riddims for artists we’ve been hoping to work with.  Suku from Ward 21 is one of our favorite artists.  Lion suggested that we get both deep voice Gods on one track so he made it happen.  Really proud of this track and the remixes have elevated the project!

Liondub: Yeah pretty much that, plus I had been working with Suku and Mr Lexx separately for a while and when i suggested putting them together on one track they were gassed cuz it had never been done before and they have similar sounds.

Great to see L-Side on the remix again, any more tracks from him to come out on Liondub International?

Liondub: I’ve worked with L for years and we have pushed out a few remixes from him before, but he’s gotten super in demand and busy so hopefully something fresh will be in the works when he gets free time.

When can we expect more music from Rumble?

Marcus: We are working on the Printa Riddim Remixes right now.

Liondub: Yea, that's a massive project with remixes from Lost City, Vital, Sikka, Toby Ross, Teej, Marcus and myself, Guzi, Jayline and Zoro. We are also about to release a track with Don Cotti and Lost City as well as numerous new multi-artist riddim projects. Loads in the works.

Liondub: Super well put together, well rounded site and socials with a load of amazing and insightful features and reviews.

Marcus: Shouts to all my Toronto fam!

Liondub: Thanks to JDNB for giving us the time to shine, and a million thanks to everyone who continues to show love and support for Rumble and the Liondub International label and artists!