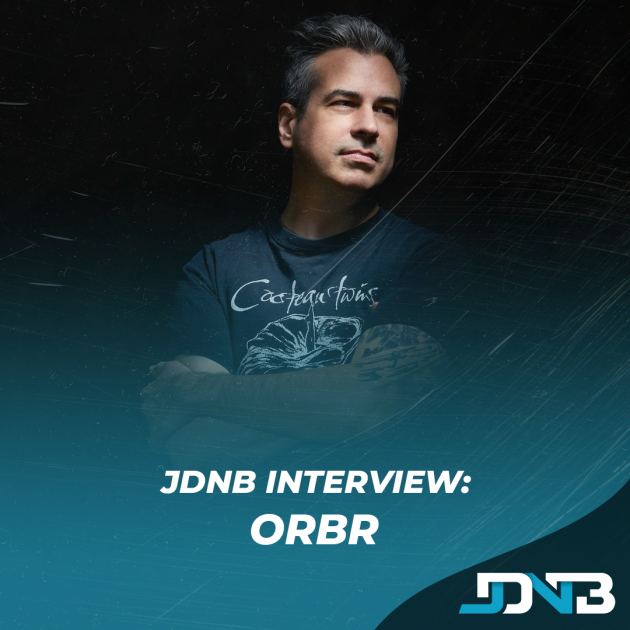 The last time we had a chat with Jason was during the first lockdown, so we thought it would be a good chance to have a catch up and see how he was doing and what was new.

Happy New Year and thanks for talking to us again. It's been a crazy year with this pandemic, have you been coping ok and what have you been doing to fill your time?

Thanks, and Happy New Year to you guys as well! Always a pleasure. As before, making music is one of the very few things that’s kept me from straight up losing it. Another is rejoining social media, which I’d been taking a break from. But since we’ve got a few more months left on the moon, so to speak, I broke down and reactivated some accounts. It definitely helped with the loneliness. Say what you will about the evils of social media — right now it’s almost crucial to keeping sane.

It's been a while since we last spoke, so what's new in the world of Orbr?

I’ve got a whole new bag of production skills to work with for my next batch of tracks. 2020 was hugely educational for me. I recorded and released 15 Orbr tracks last year, and each one taught me more than the last. I’m also making halfway decent cover art with some new graphic design software, and finally getting a grip on dynamics and mastering.

You did a link up with Ragga Twins on your latest track ‘The Horn Of Babylon’, How did the link up come about?

It just so happens that a badass organization called JungleDrumAndBass.co.uk got me that particular connection! I’ve managed to cultivate a great rapport with the JDNB family since I first reached out with a cold email last spring, and you guys were the first ones I went to when it was time to find a rasta MC for my new track. I literally had no idea you’d come back to me with a Ragga Twins hookup! Let’s just say I didn’t get much else done that week. I’ve never worked harder on a demo! I mostly communicated with the Twins’ manager and producer, and they were fantastic. Plus the Twins just absolutely killed it in the studio.

You love using your sci-fi effects, what kind of plugins/hardware do you use to make these sounds?

Logic is the big one for just about everything I do. I also use PhasePlant by KiloHeartz if I need to craft something from scratch, or just have more control. UVI.net has a bonkers lineup of plugins, and — not gonna lie — every now and then I just rip shit right off of YouTube.

How is the mood in Minneapolis a year later after the George Floyd killing and do you feel the community has been brought closer together where you live?

It’s been a shit year, honestly. The police department took a massive budget hit, and there’s a sense that cops are just phoning it in. Predictably, crime has skyrocketed. Carjackings went up something like 400%. People were getting their apartment windows kicked in and getting robbed in like the middle of the afternoon. It’s almost as bad as the mid-90s when we were dubbed “Murderapolis”. There’s a sense that it’s going to take some time to root out the bad apples from the police force (and their bosses) and until then it’s just going to be very, very tense. I hate to say it, but I don’t imagine this next summer is going to be any better than the last. If nothing else I’ve learned to check my white privilege, something I’ve never thought too much about before 2020.

Which other artists are you feeling right now and why?

I’m constantly scoping out new drum and bass tracks for inspiration, but I spend a lot of time in other genres as well. As I write this I’m listening to Trian Kayhatu, the impossibly talented broken beat producer from the Netherlands. Between him and France’s Evil Needle, I really get my funk / soul / R&B fix. Not many junglists out there put the focus squarely on melodic structures, unless they’re straight liquid, and I think it’s a shame. Hospital does a good job of squaring that particular circle that Moving Shadow managed to pull off so smoothly back in the 90s with that “1% jazz, 99% funky shit” formula. I want to bring chords and melodies and musical structures to parts of the drum and bass world that live OUTSIDE of liquid. I see flashes of it here and there, like on releases by CIA, Symmetry, Commercial Suicide, and Metalheadz, and more recently Vision, but it’s fairly rare (unless I’m missing out on a whole scene). So much of the jungle world seems to be obsessed with minimalism, even the rougher stuff. That’s fine for those who like it, but I want to live in a more candy-colored world. And those inspirations for me come from talented songwriters both in and out of the drum and bass world like FVLCRVM, Machinedrum, Mitch Murder, Rockwell, and Todd Terje.

What studio gear would you love to have and why?

I’m honestly really satisfied with my current setup. It’ll take ages for me to get through all the sounds in Logic and my various plugins. I think instead of gear, I’d rather work more with other musicians and performers. My favorite instrument is the human voice, and there’s an ocean of mind-bending talent out there!

What does your studio consist of now??

Logic of course, plus PhasePlant, plus a few VSTs from the mighty UVI.net: Darklight IIx, Drum Designer, Synth Anthology II, and Xtreme FX 1.5.

Certainly another flurry of releases. And more collaborations, I hope! I really got a taste for working with vocalists after collaborating with the Ragga Twins and Minneapolis indie rockers Oaks. I also want to finally release an EP. At some point I’m going to want to focus on a particular sound and just do a few tunes dedicated to that vision. Every song I work on wants to run in its own crazy direction, which is great, but I need to work on exercising that control of vision more. I keep thinking of Mitch Murder’s beautiful Elevator Music EP, in which he took a break from his trademark synthwave sound and went on a little tour of early 90s chill-out techno. He held that vision through the course of four truly stunning tracks, probably some of his best honestly, and then went right back to 1984 like it never happened. I want to do something like that.

Any more tracks to come from you feat other artists?

I sure hope so! Nothing slated at the moment, but I truly hope that Twins collab will open some doors. Plus I plan on traveling to Europe as soon as Covid fucks off, so hopefully that will lead to some interesting connections. And I’m way overdue for a trip to Chicago. Minneapolis has no jungle scene at all, and they’re probably the nearest hub.

What do you love doing in your spare time away from music these days?

Movies and TV shows are huge for me. I don’t have kids or much of a social life, and so when I need a break from music, I’ll just zone out on my couch. There are always great new titles coming out every month, plus revisiting old favorites always gives me a sense of comfort.

The sheer range of artists and sub-genres is almost too much to keep up with. I loved your recent interview with Conrad Subs, who’s now really starting to break through and is a huge inspiration to me. You guys killed it last year, and I know you’ll absolutely wreck things in 2021!

Many thanks from us all at JDNB for supporting the website the way you do, Lastly any shoutouts from yourself?

Thanks for having me again! A big shout out to Missrepresent for hooking me up with that Ragga Twins connection! Obviously massive big ups to Deman and Flinty for tearing the studio apart doing the vocals for my next single The Horn of Babylon, out 16 February. Huge respect to their manager Martin Love and their producer Dean Barratt for walking me through all the nitty gritties. Shouts to DJ Pfeif, DNB Dojo, DJ Maouq, DJ Ollie, DJ Prospect, DNB Vault, and Drum and Bass Network Radio for spinning my tracks and answering my cold emails when I didn’t know a single soul in the jungle. Even if one particular track or another wasn’t their cup of tea, they’d still write back and give me some constructive advice, or at least some positive encouragement, and that means the world to an up-and-comer like me. MAD respect to that!