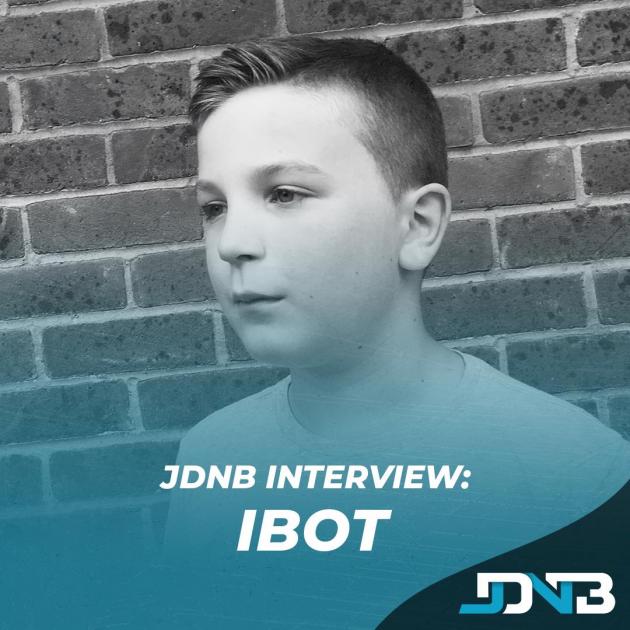 We're super excited for the boy wonder Ibot to be passing through on our 'Shadow Boxers' guest mix series and for an interview.  Holding down a hugely popular resident show on the legendary Life FM headed up by Paul Roast, this 12 year old DJ extraordinaire carries with him the great tune selection, mixing ability and etiquette behind the decks you would expect from any respected, seasoned selector.
Already having received public support from the likes of Missrepresent, DJ Brockie, Doc Scott, DJ Rap and more recently winning the DnB Politics DJ competition, the future is bright for this young junglist.

Thanks for talking to us Oliver. Great mix you did for our 'Shadow Boxers' mix series.  How have you been keeping yourself occupied during the Covid-19 Pandemic?

Thank you. Well firstly I had homeschool work to complete, other than that I spent a lot of my spare time teaching myself sound design and producing music. I still had my radio shows to do so I was also on my decks quite a bit.

What would you say first got you into jungle / drum and bass?

My dad used to play it to me from an early age, apparently it was the only music that would stop me crying when I was a baby. I soon ended up watching lots of events on Youtube when I was a toddler.

How do you split the time between music and school work?

My school work is important and my plan is to go to University and study music technology so that I can have a career in music. I’d like to go on to teach at some point too.

I make sure my homework is done and then spend some time playing with Logic every day..even if its only for 20 minutes.

Describe the style of jungle / drum and bass you play?

I listen to most types but personally I’m into the darker side…heavy Amen breaks and dark and dirty bass lines.

Who would you say have been your biggest influence within the scene?

From the DJing side I would say Brockie, Andy C, Nicky Blackmarket, Hype, Kenny Ken…they all made me want to learn how to mix.

And your biggest supporters?

I would have to say Missrepresent who discovered me on social media, Brockie, Simon from 2 Bad Mice, Nicky BM, Chalkie White,  Ranski, too many to mention….they’ve all supported and encouraged me along the way.

How is the production side of things coming along, and will we hear any Ibot tracks soon?

It’s going ok. I’m still learning lots. Ive been using Logic Pro since I was 6 but have a long way to go! I have a collar going on at the moment and another about to start with another artist. I have one track that I finished and has been played by other dj’s called ‘Push Up’ that is on my Soundcloud along with some older bits from when I started out. I'm still finding my own sound really.

My first radio set was actually prerecorded for Missrepresent when I was just 10 years old. I recorded a one shot mix and sent it off. I was blown away that my first radio appearance was on Kool FM, home of lots of legends!

My first live set was a guest mix on Life Fm…I was very nervous to start with but after a couple of mixes I zoned in and it was a real buzz. I knew I had to do it again some time.r

See you have played at RaverTots, how was that and have you Dj’ed at many other nights?

RaverTots was good! I played at Fire in Vauxhall, Mike invited me down and I played b2b with Dizzy Blonde. Lisa was awesome and also put my name about. She got me a gig at We R Family festival with Chalkie White…I played with Slipmatt, Nicky BM, DJ Monk…I made some great contacts.

I also played with Nicky and Kenny Ken at NME in Eastbourne for RaverTots. I had been invited down to play some proper nights this year but unfortunately as we all know the clubs have been shut. I was also booked for Wilkestock and possibly Pierjam but it all looks like next year now.

You have a residency on Lifefm.tv (Paul and Mel are lovely eh?)!! How did that come about?

Paul and Mel are like family to me, they gave me my big break and looked after me. Teknola followed me for a while on Instagram and invited me down to do a 1 hour guest mix on her show. Half way through Paul came in and said I should have my own show. My parents got a call the next day and I started my own monthly show 2 weeks later.

You recently got asked to go on Kool London by Brockie too, how did that make you feel?

Very honoured!! I met Brockie recently and he’s such a nice guy. My life DJ goals were to play a set with him, so get this invite already is insane!

I have a Traktor S4 mkII and use a MacBook Pro just for that. I also have a set of SL1210 mk3D’s so that I can mix on more than 2 decks without having to layer tracks on the S4.

My studio is an iMac and I use a Native Instruments A49 keyboard. i have Rokit monitors for now.

What would you say has been your biggest achievement so far?

I would say probably having my own residency on LifeFM. I didn’t expect to be this far already, plus I have played lots of other stations in between.

And what can we expect from you in the next few years?

I’m hoping to have some released music sometime soon. I have a performers licence too so that I can play at main events and nightclubs, that's my next big goal for 2021. I have been approached already so we’ll see what happens.

Any tips for the younger generation wanting to pursue a career in the drum and bass scene or as a dj in general?

Hard work and dedication. Don’t give up and if and when you start to get somewhere, stay humble!

I really like to check out the jungle and promo sections most. I find a lot of music that I may have missed otherwise.

A massive shout out to Missrepresent who first put me out there! Also my family for supporting me and letting me follow my dreams, and to all the big names that have encouraged me and given me advice. All the labels and artists sending me promos and last but not least all the people who follow my journey and log in on  my shows every time.

Thank you for inviting me to submit a mix on here too.