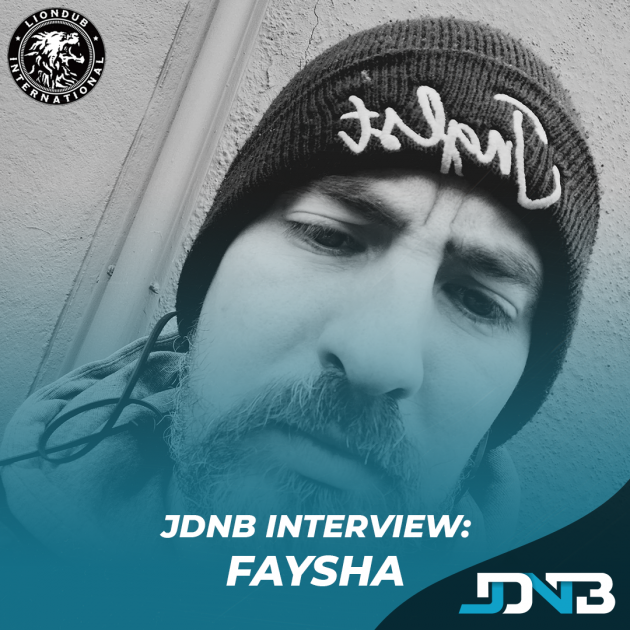 Faysha aka Dan James is originally from London, but has lived in Essex now for the last 14 years - he grew up with jungle in it's prime, early 90s. Taping KoolFM off the radio. He just loved the jungle stuff, and his sound is heavily influenced by 90s reggae and ragga, as well as artists like Krust, Roni Size and DJ Zinc to name a few.  Also while running his own label, he has also been busy making an album for the New York record label Liondub International.  With the first single from the album 'Dub Organizer' dropping recently we thought it would be a good time to have a catch up.

I’m lucky in as much as my day job has allowed me to carry on working. I’ve worked through the whole thing, and while that might have put me at a certain risk, I’ve been grateful for the work, because I know others have struggled. Think it was harder on my family with the kids being off school for so long. So life for me during the pandemic has pretty much been the same.

Tell us a little bit about yourself and where you are from?

Well, I’m married with two kids, and currently live in Essex, England. We moved here about 15 years ago after previously spending the first part of my life in London. I miss London a lot, but we moved here for family reasons, and are really happy where we are. It’s a nice place to raise a family.

In your own words ‘what is drum and bass’?

A feeling. Lots of feelings. It’s mad because my wife really doesn’t like it at all, which sort of demonstrates the fact that you either love it with a passion or you don’t. It’s not background music. I love dnb for how versatile it can be. It’s a great genre to work with. So many musical styles and elements can be used. Drum and bass is a vibe for me.

Well, I remember stumbling across drum and bass in the very early 90s. Kool FM and people had tapes and stuff. This was when I was young; just starting high school. Then I was exposed to a lot of dancehall and ragga from the 90s which was amazing.  Got into some hip hop at the same time. My whole family is very musical, and my Dad taught me the guitar as a teenager, and played me a lot of Bob Dylan music, and Dylan quickly became my idol and still is to some extent.   I began writing songs, and at that point, I sort of fell out of the drum and bass scene. Went on to form a band and do some solo singer songwriter stuff, before starting a family. So I have many musical influences which I am always drawing on for inspiration.

What first got you into jungle drum and bass, and was there a specific track that made you think “yeah this is the genre for me”?

Tough question, but I seem to remember ‘Style’ by M Beat really grabbing my attention in the early days. All those amazing samples, and it was nothing I’d ever heard before. Then early Hype and Zinc stuff, Aphrodite, Roni Size. Those kinds of things.

Getting this release worked out with Liondub has been amazing for me, so that is definitely up there as the biggest highlight for me.  I’ve made a lot of good friends and been able to work with some amazing producers and artists, who are a massive influence on me. And just being part of a scene I love - being able to give something back to a movement I love.

What does your studio consist of, and what’s your fav plug-in (if used)?

I joke when I say I am the most ghetto producer out there, but it’s true. I’m out here sitting at my PC with my headphones on making tunes day and night. I’m planning on upgrading stuff at some point, but my setup has served me well so far. I’m using FL Studio and I’m not a huge collector of plugins, but I love echoboy and decapitator from Soundtoys, as well as a great free plugin called Fresh Air, and I still use some of the stock plugins on FL Studio.

You have your own label too, right? Tell us a little about that?

Yea, me, Leks, Acee and Ballistic all run Big & Heavy Recordings, which has been a lot of fun. It’s hard work too, and you can question your own sanity at times, but it’s about giving something back to the scene and working with established and emerging artists which has been really good. I’ve also got some other plans in the works, so watch this space.

So many amazing producers out there right now. Current top 3 as I’m writing this would be

Niterider - I love all his stuff. Just a vibe coming through on every tune he does. Great guy, too.

I really like anything Dunk touches - that low down bass he gets is amazing. Can be quite minimal, but still so weighty.

And I will always jump on anything DJ Gaw puts out. Just wavey tunes every time. Brilliant stuff.

Your latest release ‘Dub Organizer’ with Red Fox and Liondub is out now on Liondub International and is a sampler of your forthcoming album. Tell us how the link up came about and what we can expect to hear on the album?

It’s been a long time in the making, which speaks to how busy and active Liondub is. I must have first sent him tunes about a year ago, and it’s been a gradual process, in which I’ve learnt so much. I was hyped when he suggested getting some vocals on some of the tracks, and the link up with Red Fox has been amazing, and the single turned out so good.

On the album, you’re gonna hear me hopefully trying to show my range and musical styles. Gonna be some big kinda club tracks on there, as well as more tunes you can listen to start to finish. Drawing on a lot of different styles and genres and just hopefully catching some sort of vibe on every track. It’s going to be tunes that can be played at a rave, but also an album that you will get something out of by listening start to finish. That’s the plan!!

Nick The Lot on the remix too, how mad is that?

We were discussing who to approach for remixes, and Nick was probably the first name I thought of. I’m a big fan of his work, and he didn’t disappoint with his remix of ‘Dub Organizer’. Really understood the feel of the track, but gave it his usual treatment, and I think it’s wicked!

I think an important thing is trying to establish some sort of personal connection, if possible. Might not always be easy with bigger labels, so maybe work your way up. Start with smaller labels that suit your sound; so do your homework on that. Don't send some chilled liquid to a mainly jump up label. But just put the work in. I’m a big believer in getting results if you just keep plugging away. Make music that you enjoy, and you’ll find that others will too.

Music! All sorts of music. My tunes are very sample driven and I’m always on the hunt for samples from everywhere. I have to catch a feeling for a track quite early on. I will very rarely just start with a drum pattern. So, I'll hear something that peaks my interest and just take it from there.

If you could remix one track from Liondub International,  which one would it be?

So many good tunes to pick from. Would probably love to have a go at ‘No Sound’ by Dungeon Kru

Wow!! Another tough one. Here we go -

From The Top - Speaker Louis

Just to keep it all moving. Think I want to take a bit more time on things, even though I’m naturally impatient and restless. Just want to improve with each track I make - keep working with amazing people, and maintain my focus.

I grew up with websites!! Long before social media was around, websites were all we had, so it’s great to see jungledrumandbass.co.uk out there doing their thing. Supporting the scene and being a great portal for the music. I read every interview that comes out, as it gives a great insight into the minds of the producers and artists. Keep up the good work.

I’d be here all day listing everyone that I am lucky enough to know and work with. Enough to say you know who you are - I tell you all the time, and your support, and advice is always at the front of my mind. Big ups!!