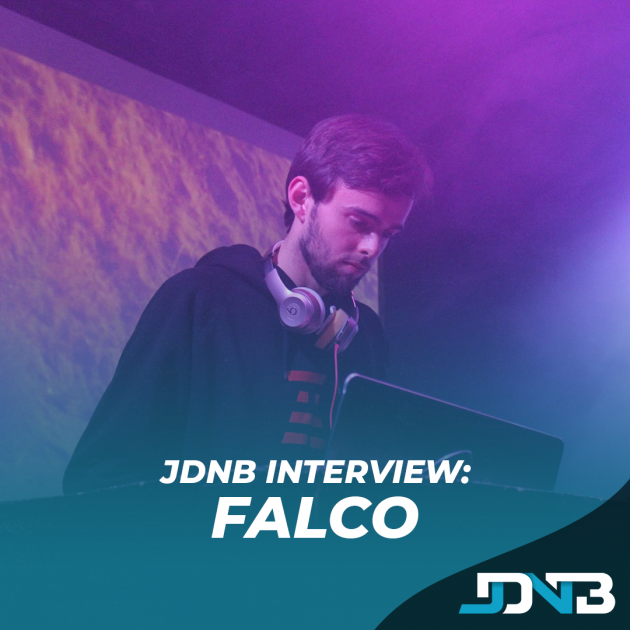 Although first making a name for himself with his Jump Up production, Dutch producer Falco is focusing more on the darker side of Drum and Bass. His projects can be found on labels such as Dubstomp 2 Bass, Underground Major Audio, Storno Beatz Recordings, Raw Motion Records, Lickwood & Gunshot, Stickybass Records, Kevlar Beats and more to come. Some of these projects include collaborations with a versatile selection of artists including NiteRider, Dungeon Kru, MadRush MC, Maurizzle, Dubfield and Erratik. These projects have led to support from many DJ’s throughout the world and an appearance on Spotify’s hugely popular Bass Arcade playlist. Many projects are on the schedule, so keep an eye out for his future releases! We sat down with him to discuss his latest release 'Happy Meal' which is out now on Underground Major Audio.

During this pandemic, I have been focusing on making music. Not only have I made a lot of new DnB tracks, but I also started an Ambient sideproject. Since Covid, I started to build up a CD collection solely for sampling and that helped me come up with ideas for new music.

I’m from Zeist, a town near Utrecht in The Netherlands. There isn’t a lot to do in my hometown, but luckily Utrecht is a 20-minute bus ride from here. Utrecht is home to a lot of Drum and Bass events, such as Blackout and Ripple Sessions. I never really played instruments when I was younger. I learned myself to play chords while I was already producing Drum and Bass. Because of my parents, I listened to a lot of rock and 80’s music when I was younger. Eventually somewhere around 2012, I listened to house and somehow, I got into Dubstep and Drum and Bass not long after.

I love to hang out with friends and go to music events, but that’s obviously a bit difficult in these times. I really love to go to thrift shops and hunt for old games, vinyl and cd’s (and that’s how the cd collection started hahaha).

I listened a lot to music on the UKF Dubstep channel around 2012. Because of that, I found the UKF Drum and Bass label and I listened to a lot of old Netsky and Sub Focus tracks and since then I started to check out more artists and labels. The track that stands out from that time is a track from 2014, MUST DIE! – Hellcat (Annix Remix). Since I heard that track, my interest for Jump Up has begun.

Describe the feeling when you first had a release come out for the general public to buy/stream?

My first official release was in 2018, ‘Falco – Delusion EP’. At the time, I was so extremely excited, because it was such a huge milestone for me. A teaser by JumpUp Cave for the EP was released on my birthday as well. It was a dream come true.

Too many to mention to be honest, but I will try to choose a few. Ky, Jayline, Klay, Limited, Bou, Vital, Ego Trippin and Dutta. Definitely out of my league, but these are all producers I really look up to and would love to work with.

A laptop, bad speakers, my cd’s for samples, a midi keyboard and a few synthesizers. Last but not least, a midi controller I bought at Aldi a long time ago. Yeah, I definitely need to upgrade.

I used to make Jump Up tracks and sometimes I randomly still make one, but most of my tracks can be classified as rollers. Many tracks are representing something I like or something that was on my mind while producing. People often describe my style as darker Drum and Bass and I think that is fitting for the majority of my tracks.

What's the drum and bass scene like where you're from?

The Drum and Bass scene in The Netherlands is not that big as in England, but there are still many events to attend! Some big events are for example: Blackout, Liquicity, NOX, Korsakov, High Tea, Subquake etc. There are also some smaller events that help the scene grow such as Rolling In The Deep and Dub Valley. Can’t wait to go to them again when the whole corona situation is over!

What would be your dream lineup if you were putting together an event?

Oof that’s a tough one. I would definitely include Annix, Kings of the Rollers, Bou, Dutta, Spaow, OCC, Ky, Limited, Sub Zero, Jayline, Complex, Master Error and Klay. I wanted to add so many more, but this would be it.

Jayline feat. Champian – 'Run This Show' - Such a large tune, didn’t expect otherwise from Jayline. Vocals by Champian are sick as well.

DJ PrimeTime – 'Flagging' - Sick one from DJ PrimeTime! VIP of this one is large!

Your latest release on UMA is called ‘Happy Meal/Identification’.  Where did you get the inspiration from to make these two tracks?

My girlfriend came up with the title for ‘Happy Meal’, so I found a sample from one of my favourite games, GTA San Andreas, and used it in the track. I really wanted to use a sample from the movie Superbad and I found a scene I really liked. The scene is about someone who is going to buy alcohol for the first time with a fake ID. That’s where the title ‘Identification’ came from.

Any live streams or bookings coming up we should know about?

Not really to be honest. The livestreams I do are mostly very spontaneous, and I don’t do bookings yet.

I love the wide variety of artists that are interviewed and releases that are being covered. The site is well designed and easy to use!

Thanks for having me! Firstly, I want to thank DJ Major/Mark for including me in the Underground Major Audio team and helping me grow as an artist. I also want to thank everyone who has supported me and listened to my music in the past years. Big shout out to DJ Bomber, Mr Alf-E, Dungeon Kru, Monarch, NiteRider, Madrush MC, Illament, Anemis, Ill Dynamics, Aflek and all others for the continued love, support and feedback.

Falco - 'Happy Meal' is out now on Underground Major Audio via the following links: Juno /