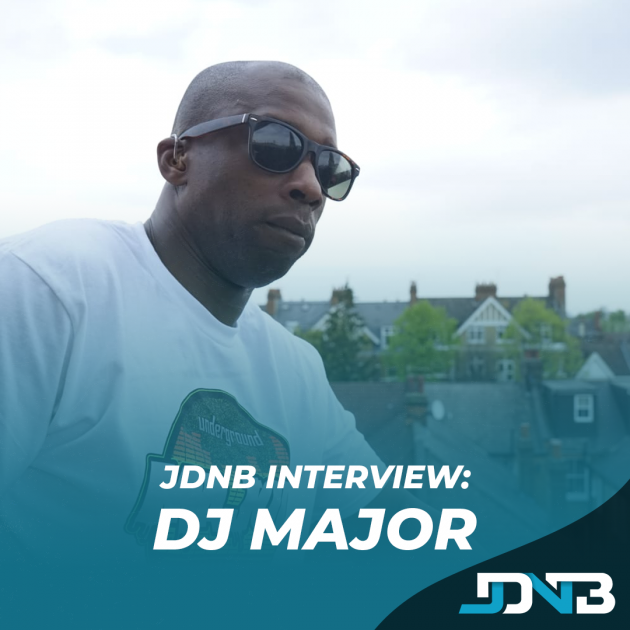 DJ Major has been in the music industry playing jungle, drum n bass & jump up since the 1990s.  He made his name on both the free party scene as well as having a strong presence on the underground and main stream radio shows like Supreme FM,  Shockin FM,  Chillin,  Rude Awakening, AND Kool FM/Kool London.  Growing up in South London he got to know quite a few of the founders of the scene so made plenty of contacts.  From running events to running a record label, plus doing his fortnightly radio show on Kool LDN, he is an extremely busy man in the drum and bass scene,  however he took some time out to have a little chat to tell us more about himself and his label:

I've been keeping well and staying safe, Trying to use this time wisely promoting my music and locking myself in the studio.

I'm smiling as I'm thinking about this. There is a tune called ‘We Are Ie’ that came out many many moons ago and got rinsed. That’s a classic for me.

I see you have been in the scene from the start, how would you compare the raves now to when it all first started?

When I first got into the scene it was in the late 80s listening to the likes of Bryan G.  The style back then was totally different, it was all one genre if i remember correctly. Whereas today there are loads of different sub-genres so our music has progressed and been redefined.

The music I produce reflects my style of djing, which is ENERGY and VIBES.

Who would you say has been your biggest influence to make this style?

My biggest influence i would have to say is Taxman. I've been into his sound for a while now.

What would you say is your biggest achievement within the scene to date?

Tell us more about your label ‘Underground Major Audio’ and the artists you have on it?

UMA has been running for about 18 months. I was returning back on the scene after a bit of time away. I wanted to bring my sound into the scene and support new talent. The scene is a hard one to crack.

I currently have PrimeTime who had his debut release last month with his ‘Terrified EP’... ‘Terrified’ and ‘Flagging’ are  absolutely banging tracks. Also Terra who recently dropped his ‘Executioner EP’... this in my opinion is a massive EP.  Also veteran Jayline passed through with a few releases and has some more dropping before the year is out.

Falco is dropping his debut release ‘Happy Meal EP’ in November…. This EP is weighty . You will also be hearing DJ Major dropping music around christmas.

What is the next release due to come out on the label??

The next Release is due in November by Falco with his debut release,  ‘Happy Meal EP’.

Tell us a little about the events you used to put on and do you plan to return to promoting once we are allowed?

I used to put on an event called ‘Twisted’ that was held in Woking, Surrey. A really good event that I had Bryan G, Ruff Stuff, Nicky Blackmarket, Logan D, MC Fun, MC J Swift, and MC Kazy B all play at.

Tell us a little about your own solo releases?

My first ever solo release was a track called ‘Work With IT’ Ft Champian who is a well known reggae sound man. It's on a new skool jungle tip. I also had a release on Kevlar beats called ‘You Know Me E.P’,  that was released on the 4th of this month. Then we have ’Top Bill’ , another release with Champian. I've recently produced a track with Champian called ‘Under Lockdown’ that will be dropping around Christmas time.

You can check my music on spotify, itunes, juno, beatport and  amazon music.

And a little about the collaborations you have had?

I have been blessed to collaborate with a few artists including DJ Terra on a few releases on ‘Underground Major Audio’.  We are currently working on the refix of ‘Pablo Escobar’. DJ Terra, Primetime and myself also did a bootleg which is currently a free download from www.undergroundmajoraudio.com ...so go grab that. Jayline and myself are currently finishing off a collab which i'm enjoying at the moment.

Any tips for anyone wanting to get into producing?

I pretty much taught myself. The tips i have are, practice makes you better,  always believe in what you're producing and take short online courses.

What can we expect from you and your label going forward?

Look out for fresh music from myself. Before Covid 19 came about the label was about to have its first event.  That's on hold until the clubs re-open. Look out for music from Nicky Blackmarket coming out on UMA and a few other big names too.

I think your website is great. It supports the scene, lets people know what's happening and gives lots of information about the artists.

Big shout out to all our fans and supporters. Shout out to my UMA team and the artists and the crew behind the scene. PEACE LOVE.

'You Know Me EP' by DJ Major is avalible now.