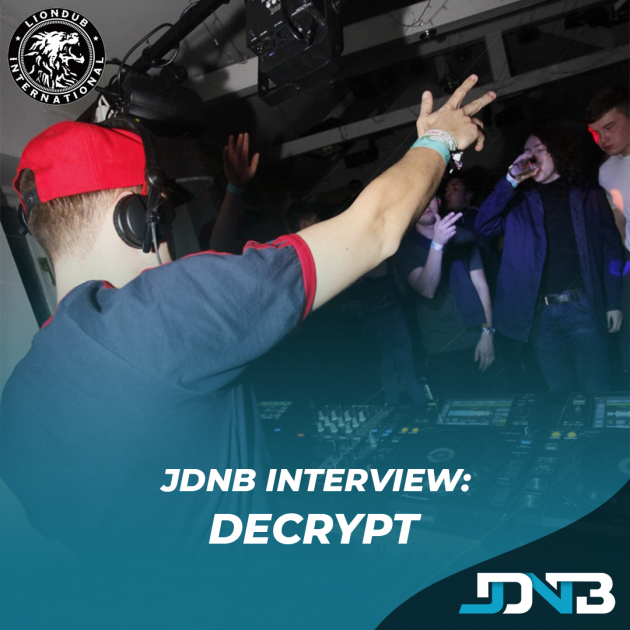 For Decrypt, drum & bass is his life, he started listening to jungle as far back as he can remember and was keen on using his brothers turntables to replicate the sets he listened to. Decrypt spent most of his childhood listening to sets to study the music. He finally started producing in late 2016 and has recently grasped his own style - dark, minimal rollers while still staying true to his love for jump up.

Decrypt became a resident DJ for Rough Tempo in October 2015 and has since then performed at Let It Roll Festival Prague, Breakin Science a number of times, SumoBeatz and many local events near the town he is from in Essex, England.  With his recent 'Liondub Street Series Vol.61: Hear This' out now on all platforms, we hit him up to find out more about the release, Onlydrums and generally all things dnb!!

Hi JDNB! Well thankfully I haven’t stopped working throughout the pandemic which has kept my brain active but outside of work I’ve spent it with my family and I've used a lot of the time to work hard on my production. In a weird way it’s been a blessing in disguise for my progress in music, although don’t get me wrong I would have preferred to be let out to play a long time ago!

Tell us a little bit about yourself and where you are from?

I was born and raised in Essex, UK, originally from Grays and now living in a small town near Southend. I spent 5 years as an 999 call handler working for the ambulance service which was an interesting job to say the least. I left there and now I have a job in maintenance which gives me a lot more time to myself to make music which suits me down to the ground. I’m a massive Arsenal fan and I love food.

In your own words ‘what is drum and bass’?

What a question. For me, drum & bass is not only a genre, but it’s a culture as well. It’s a genre that has evolved from jungle which is chopped up hip hop breaks and amen breaks but still to this day you can hear the jungle roots in a lot of the new music that’s coming out which I think is wicked. drum & bass is just an all round happy vibe!

Liam Howlett of The Prodigy has got to be up there, he was a genius in the 90’s and just made timeless tunes so easily which I think is such an amazing skill to have. Also a definite influence of mine is Dillinja who opened my ears to the production side of d&b. He was definitely ahead of his time and I still play his tunes in my sets to this day!

What first got you into jungle drum and bass, and was there a specific track that made you think “yeah this is the genre for me”?

It wasn’t a specific track I don’t think. My brother was a junglist back in the day so I used to hear him play sets all the time, he had a pair of 1210’s too so I used to have a go on them and even though I was absolutely useless, I still loved it! Ever since then I’ve listened to drum & bass every day of my life.

My 3 biggest achievements so far have been playing at the ‘Let It Roll’ festival in Prague, which was pretty special. Forming OnlyDrums and my release on Liondub Street Series is a huge achievement for me too!

What does your studio consist of, and what’s your fav plug-in (if used)?

In a few weeks I will have fully upgraded my setup as my Macbook has stopped wanting to run Logic for longer than 10 minutes! I’ve ordered the new iMac M1 which is gonna be coming soon, really excited about that as the specs are nuts on it! For monitors I use Yamaha HS5’s and I use an M-Audio Oxygen keyboard. Before this I just used to produce sat on my bed wearing Senheisser headphones so the upgrade was well needed haha. For plug-ins, I’d say anything by Soundtoys or Waves but I particularly like the Decapitator plug-in from Soundtoys as the sound that comes out of it sounds mad on your drums or synths.

Tell us a bit about Onlydrums and the mix series with Liondub International?

OnlyDrums was originally called OnlyJumpUp by the previous owner, who handed it down to me because he couldn’t find the time to use it. Me and Wade (10AD) got our thinking caps on and thought it’s a good idea to cater for all styles of D&B, so we named it OnlyDrums. At the moment it is a promotional reposting channel on Soundcloud releasing free downloads but we have big plans for 2021, so keep your eyes peeled!

The mix series is a Liondub International showcase for the artists on the label and we’re really humbled to collaborate with Liondub on this.

Wow, this is a tough one as there are so many good producers out there. At the moment it’s got to be Filthy Habits, Toxinate and Vital. All because they bring something different in their music that no one else does in my opinion.

Your latest release ‘Liondub Street Series Vol.61: Hear This’ is out now on the Liondub International. How did it feel when you knew it was getting a release?

I was absolutely gassed, I’ve always bought every single release on the label so to now have a release and my face on one of the covers is amazing!

You’ve got to work on your sound first, spend many many hours in the studio crafting what sound you want. Also don’t rush in releasing anything, it’s not a race! A good tip is surround yourself with likeminded artists and send your music to people you trust who will give you good honest feedback. And lastly, make music for you and you only!

Mainly it is all off the cuff for me, I’d start with a melody first and see where it takes me or start with a drum pattern first and see what I can come up with after that. It all depends what mood I’m in. Sometimes I will wake up to an idea or a melody in my head that I have to write down on Logic.

If you could remix one track from Liondub International,  which one would it be?

Dutta – Easy Does It

To progress further with my production, maybe invest in a new synth. Also plans are in place to level up OnlyDrums soon, seeing as it is 2021 ;)

I personally love the interviews the most as it gives an insight into what the artists are like and how they work, which is a really good read!

Thanks for having me! Big shout outs to my boys at OnlyDrums, 10AD & D-Flex. Got to big up Liondub himself for believing in my music! Massive love to all who support and share what I do, it really is appreciated!!