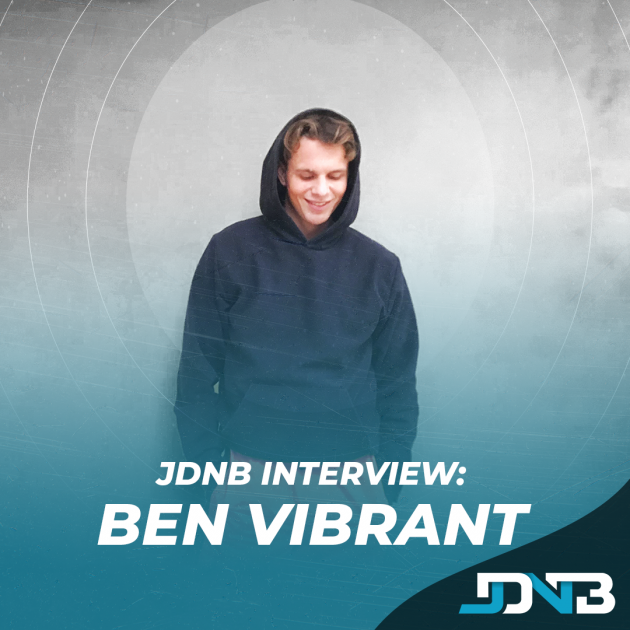 Ben Vibrant is a Drum and Bass producer born and raised in North London. Influenced by the Drum and Bass culture from the free party scene, artists such as BCee, Dj Marky and Alix Perez have played a huge impact on his current sound.  He first started DJ’n at house parties and illegal raves under the name “Herschey’ before going to university and studying sound engineering and learning production.  After university he changed his name to “Ben Vibrant” and was signed up by DNBB Records.  His new EP 'Be In L.A' is out today so we thought we would have a chat and learn a little more about him:

Thanks for talking to us Ben.  How have you been keeping yourself occupied during the Covid-19 Pandemic?

No problem! It’s great to come on and chat. I have mainly been focusing on my music production and playing the guitar. As there are no clubs or big events open I think this is a great time for some self improvement. During the lockdown period I got really creative and met some cool musicians online who I have been collaborating with since. Now things have opened up more, I have spent my weekends at the studios with them and I can't wait to release some more music. Despite that I have been improving my cooking!

My influence for Drum and Bass started when I was introduced to the free party scene by my best friend. A sound system crew put one on in my local area Barnet in North London and I got hooked. The way people danced to the music and the positive vibes in that environment made me want to learn more about it. I was already a musician so I found it really interesting. Tune wise, I’m a liquid man myself so it would have to be Netsky “I Refuse”. S.P.Y “By your side” comes second.

I love catchy chords and flowing melodies, which is what you can hear in my new EP “Be in L.A.”. The reason why my artist name has “Vibrant” in it is because that's the sort of Drum and Bass I want to produce. I’m more on the liquid side in comparison to the heavy style.

My track ‘Between Us” is probably as heavy as I would go. I love using sound design as I am a sound designer by trade and there are a lot of techniques such as Granular Synthesis which you can hear in “Between Us”.

Who would you say have been your biggest influences to make this style?

That’s a hard one! My three favorite Drum and Bass artists to date would be BCee, Alix Perez and Netsky. They’re legends in my opinion and the track “Moving with you” by Netsky is the style of music I eventually want to produce. Despite that I am loving what the labels North Quarter and Jazzsticks are coming out with.

What would you say is your biggest achievement within the scene to date?

I reckon getting signed is the biggest to date, my music is finally getting played on shows and I am being introduced to more people on the scene. Alongside this I loved playing at parties and local events over the years and even though it wasn’t a big deal it was still really fun.

Tell us how you got signed to DNBB Records?

I studied Sound Engineering at university and learnt the ins and outs of music production. Once I graduated I felt like I was ready to start getting my music out. I self released my first single “Riddles” featuring a vocalist I met at a Madness gig in London. This caught the attention of DNBB Records and once I finished my next EP I sent it over to them and got signed. They’re a really cool label coming out with some soulful liquid vibes, the owner Aaron who goes under the name Mystific has helped push some big liquid artists onto the scene and is really supportive.

You have a new EP ‘Be In L.A.’ which is out today, tell us more about that and what influenced you to make that EP?

I have been buzzing to release this! The lyrics in “Be in L.A” basically stem from wanting something more in life. The lockdown situation we were in definitely had a big impact on the music I was making at that time. My brother moved to LA last year and I guess that was part of the influence. I tried giving “Be in L.A” that Santa Monica style feel. The B side “Are You” was written about sparks in romance and going on a date with someone new which wasn’t allowed at the time! Musically I tried keeping it light and giving both tracks a soulful sound. It’s the best EP I have done to date and I am excited to see it released.

How did the link up with Ulkar come about?

During the pandemic lockdown I met a girl on a dating app called Ulkar. We got talking and I realised she was a singer. I spoke a little bit about the type of music I made and she wanted to jump on something. I wrote the chorus to “Be in L.A” and she took influence from that and changed everything up alongside writing the rest. We wrote the lyrics to “Are you” together. She was great to work with and always came up with new vocal ideas.

What does your studio setup consist of and what is your fav plugin at the moment?

Out of all the DAW’s I have used my go to is Logic Pro x. It was the first one I started using and I am most comfortable with it. I think the layout is great and easy to learn. Pro-Tools would be second but I use that more for post production. I have two KRK RP5 monitors and a scarlett interface alongside some microphones/instruments. I have a few favorite plug-ins but my go to three would be Absynth 5 from Native, TrueVerb from Waves and Camel Crusher. Camel Crusher is great for adding distortion to your basslines and it's free!

Have any of your tunes been featured on any radio stations?

Yes I have had a few played on bassdrive and Kool London. Alongside this I have had my tracks featured on podcasts from DNBB and Liquid Flow!

What would be a dream lineup for you to appear on?

My dream line up would be to do a set on the beach at Sun & Bass with DJ Marky, BCee and Calibre.

Tell us more about your EP ‘Between US’ and what gave you the inspiration to make it?

I produced “Between Us” while I was traveling around Australia. I had my macbook and MIDI akai keyboard that fitted into my backpack and took it out whenever I was free to produce.

I took influence from the people I met and the places I went. Due to a lack of instruments, the EP is heavily sample based but that was part of the fun!  Being able to take samples from the 50’s and 60’s and completely manipulate the sounds and change them up to match the song was a great challenge . The song “Got Your Number” was produced on Bondi Beach and I tried to take the sound from my surroundings to give it that summery surfer vibe.

Any tips for anyone wanting to get into producing?

Practice and learn the software! As soon as you know how to use it, the rest becomes easy. Don’t be afraid to use raw instruments and try recording things you wouldn’t usually expect in a song.

What can we expect from you going forward?

I am working on my next EP which is going to be more guitar focused, I want to use more raw instruments in my next one and heavier basslines. I want to make this next EP the best one so far. Eventually I am going to produce an album but I want to release a few more EP’s and get my name out more.

I love how versatile you guys are and cover the whole spectrum of Drum and Bass, I also like the promos you put out and how you push new artists onto the scene! I am excited to see what you guys show over the next couple of months.

No problem, thanks for having me! I would have to shout out DNBB Records and Aaron for the support, Ulkar for featuring on my latest EP and my family and friends. Stay classy!

'Be In L.A' is avaliable now to stream and download via the following link: Stream / Download / Beatport