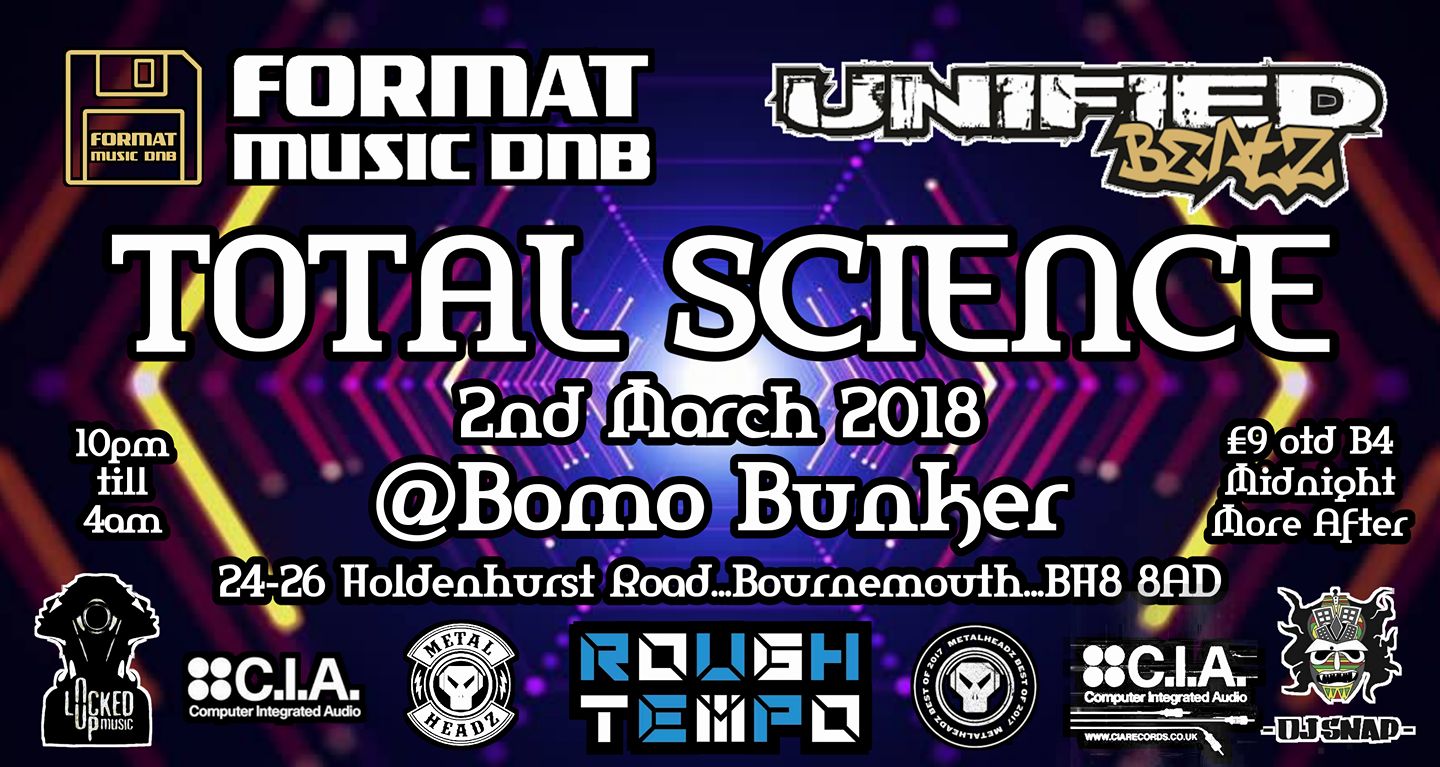 Unified Beatz & Format Music DnB are proud to present their second collaboration. Bringing together some very special guests backed up by the heavyweight talents from both of the host families.

Artist Information:
>> TOTAL SCIENCE <<
Paul Smith and Jason Greenhalgh are two of the most prolific producers within the drum & bass movement, recording for a plethora of different labels under a range of monikers. The pair first met in 1987, both living on Blackbird Leys estate in Oxford, England and brought together through a mutual love of hip-hop. Distracted by the arrival of hardcore in the early nineties, record collecting was quickly followed by DJ'ing and eventually production. Greenhalgh was the first into the studio, with "Freestyle Fanatic" launching his career in 1991. However it was the establishment of the Legend imprint and specifically Greenhalgh's "Champion Sound", which really took their profile above and beyond the slew of anonymous white labels that were dominating the music at the time.

In 1994, the pair started recording together, with "Got to Believe" the first in a series of records which pushed the label away from the fizzling darkside movement and more towards the epic string sections and rolling beats which started to appear on labels like Lucky Spin, Basement and Good Looking. After six years of recording singles for others, the pair established the CIA label in the closing months of 1997 with the help of Brillo from Timeless. The release of their Silent Reign EP for Goldie's Metalheadz breathed a new lease of life into the project, and the pair achieved a further boost with a well-timed Bad Company remix of "Champion Sound" which conjured further interest in what they were doing at their own label. Their debut album Advance exposed a further field of interest, with downtempo experiments logged as a series of "Breaks" on the majority of their early EP's extended to some superb deep house, this breadth taken a step further with their Skin Deep imprint which has forged broken beat to considerable acclaim. Their pioneering of a revival in old-school sounds and arrangements, together with Digital and Reinforced, dominated drum & bass throughout 2001 and are still going strong leading into 2018.
Credit to Kingsley Marshall for the bio.
Soundcloud: https://soundcloud.com/total-science

>> UNIFIED BEATZ <<
Unified Beatz are a family of Dj's,Mc's,Promoters,Sound Engineers who have developed a support platform up and down the country. Based primarily in Birmingham they support talented artists and push boundaries to ensure that ravers enjoy every moment.
Keep It Unified.....
Website: http://www.unifiedbeatz.co.uk/
Facebook: https://www.facebook.com/unifiedbeatz/