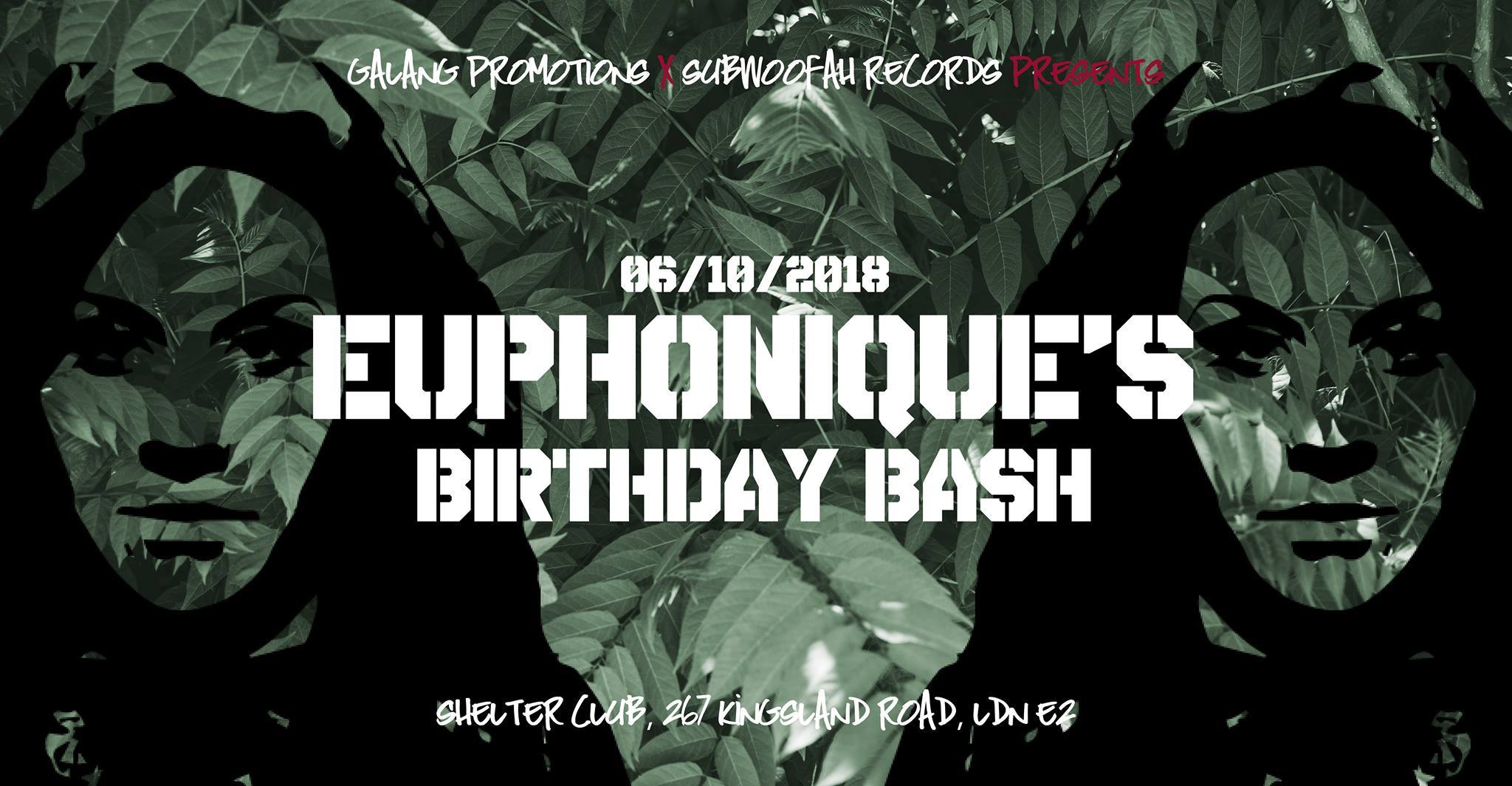 Galang Promotions and Subwoofah Records team up to present to you Euphonique's Birthday Bash - featuring some of the amazing friends she's made along the way including 4 international headliners and a melting pot of Subwoofah, Dubwoofah and Raise It Up Residents!

It's one hell of a line up so far, and we will be announcing more artists over the next few weeks, so keep your eyes on the Facebook event and grab yourself some early bird tickets (you lucky things!)

The DJ line up as announced so far:

** Nicky Blackmarket ** [Headliner] Galang Promotions are proud to present a man that needs no introduction! Drum and Bass icon Nicky Blackmarket! A key figure in the Jungle movement and a pioneer from the very beginnings. From underground raves, pirate radio and of course, Blackmarket Records, to headlining todays biggest events, clubs and festivals the world over.

** Kumarachi ** [Headliner] One of the most well known artists to come out of Audio Addict Recs and Deep In The Jungle Records, Kumarachi loves to cook us up some of the filthiest rolling basslines in the game! He really is at the forefront of the new generation DnB producers!

** DJ Hybrid ** Winner of multiple We Love Jungle Awards and runner of multiple bad man labels on the scene - predominately known for Deep In The Jungle - this guy is a machine! Continuously powering out immaculate sets, amen riddled tunes and release after release on multiple imprints.

** Marcus Visionary ** [KoolFM, Digital Soundboy, High Culture, Lion Dub, Inner City] A DJ at the forefront of the Jungle scene - hailing from Toronto Canada, he's an ambassador for the ever evolving Jungle DnB sound worldwide. Marcus is one of the few artists out of North America who has built a strong foundation in the U.K & Europe as well as in the U.S. Signed to the legendary Digital Soundboy family by Shy FX himself, Marcus joined the elite all star lineup alongside the likes of Benny Page, Breakage, Mark System, Stamina MC & B Traits. Since then he has travelled the world and played some of the biggest festivals representing his unique take on the Jungle DnB sound. Priding himself on upfront selection, clean mixing, musical versatility and a keen ability to read any crowd. Not to mention his collection of Dubplate specials which is something that has earned him fans the world over.

** Epicentre ** [Deep In The Jungle, Subwoofah, Nuusic] Representing Subwoofah - we have Manchester's veteran DJ and producer bringing wobbly basslines, heavy amens and ragga style vocals. With several heavyweight releases on Deep In the Jungle, Nuusic and Subwoofah - Epicentre is someone who lives and breathes jungle - expect some serious dub plate business - he never disappoints.

** Miss Pink ** Well known on the underground party scene as well as playing at Glastonbury for Block 9, you've probably seen this lady behind the counter in Black Market Records back in the day - she'll be spinning some vinyl and showing us how the DnB ladies do their thing.

** Bustawidemove ** Representing Uncommon Records, Raise It Up resident Bustawidemove has been djing and producing music for over 10 years. Coming from a sound system and festival dj background, Busta never fails to get the dancefloor rocking with his amen heavy Ragga jungle beats!

** Kovert Sound ** [Subwoofah, Juicy Fruit, Onyx, ManseTek, IdBogota] This top DJ and producer from Manchester will be joining us to help celebrate too!

++ MANY MORE TBA++ Expect two rooms hosting some of the best up coming DJs and producers in the Jungle and DnB game, as well as some very special big name guests!

True to the Galang Promotions ethos, all profits will be going to the St Giles Trust SOS project. SOS is an award winning service which works with vulnerable young people in or at risk of entering the justice system. To find out more about this project visit: stgilestrust.org.uk

This event will be held at the Shelter Club, 267 Kingsland Road, E2 8AS, London