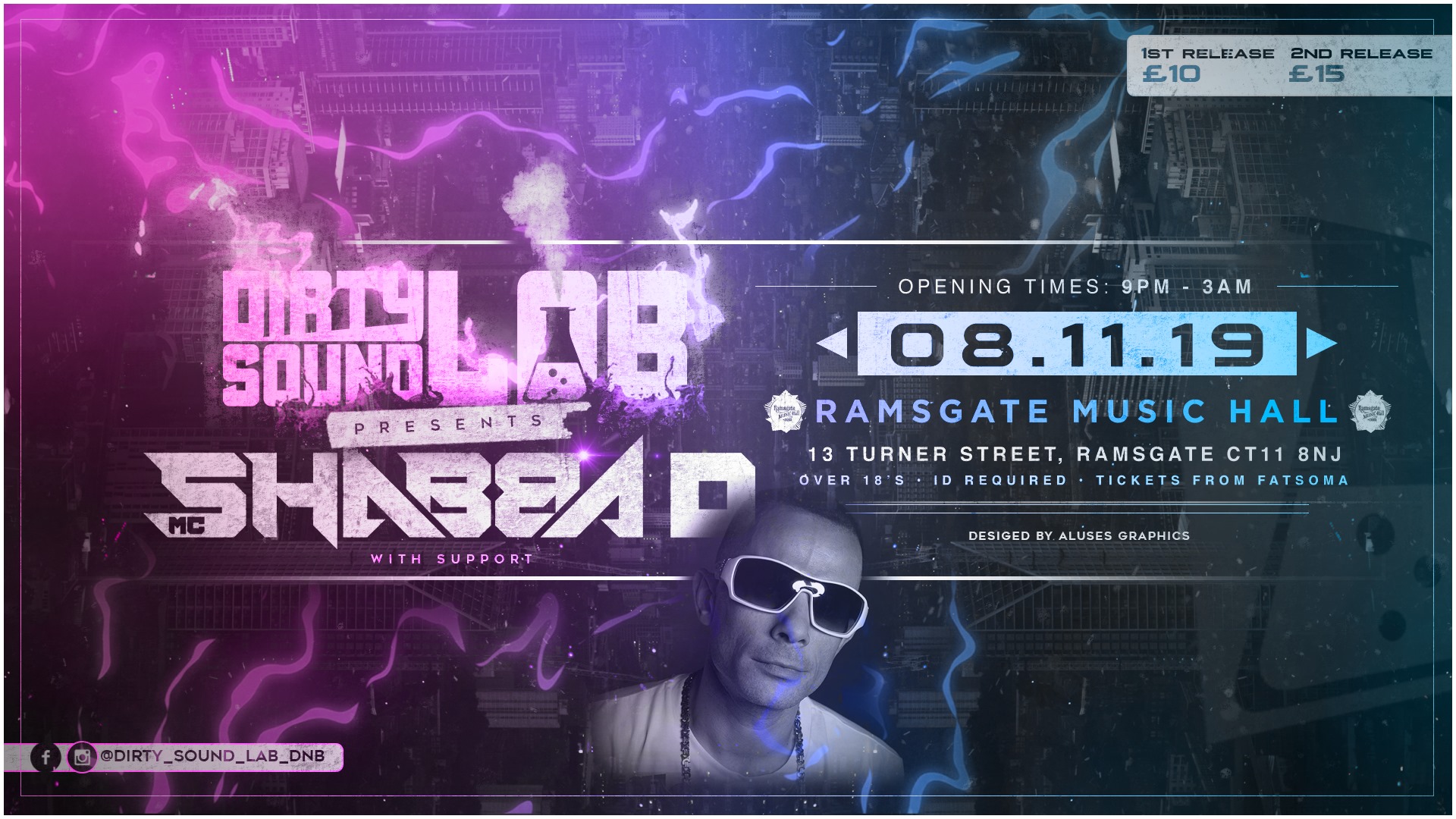 Dirty Sound Lab Presents to you Shabba D! Who is a legend MC who has been in in the jungle and dnb scene for over 25 years!

His music involvement started in hardcore and jungle through friends who ran Weekend Rush 92.5FM a prolific pirate radio station. The name Shabba evolved following his return from a holiday in Jamaica with his friends jokingly calling him Shabba B - probably because at the time Shabba Ranks was a big name in reggae music. Shabba quickly rose to fame in East London through Weekend Rush. He started his music stint answering the station phones and running errands, then eventually had a chance to MC on the station itself. By then his popularity continued to grow in the music scene, and Shabba moved onto Defection 89.4 in The early 90s By the Mid 90s he moved on to Kick FM 92.3, receiving his first bookings as an MC and resident at Telepathy every Friday and Sunday for XXX (amount of time).

In 1996 Shabba went onto work with the biggest drum n bass and jungle station of the time Kool FM in London, represented by the agency Jungle Fever. This is when things really started to take off... Shabbat mc'ed all over the UK and performed across Europe with a growing scene and following. New doors opened global doors with his first Canadian booking in 1999, followed by performances in the US. Shabba started bringing jungle music to other parts of Europe renowned for Garage music like Cyprus (Ayia Napa) and nearby islands, hosting events of his own with likes of Telepathy, Breaking Science and Matrix.

In 2003 Shabba, MC Skibadee and Paul Ibiza collaborated to form the biggest ever MC rave of all time MC Convention, and his record label Highly Blessed. This took the jungle world by storm, with parties worldwide and a huge life changing following. Shabbat moved onto Urban Agency, creating personal raves with Higher Level, Sticky and Girls Don't Pay events regularly over the years.

In 2011 Shabba, MC Skibbadee, Harry Shotta, MC Stormin, DJ Phantasy and Mackey G created the drum n bass super group SASASAS, taking the underground streets sounds of Jump Up drum n bass to the masses. Their performances are a wall of energy that must be witnessed live and have managed to capture a significant and growing global following. With a fan base that ranges from ages 14-40 plus the group's appeal is growing stronger and stronger, and will continue in the foreseeable future.

Shabba is currently working on a New Mix CD, EP and a new brand Masterz of Ceremonies - watch this space!

-Paper Tickets without the fee will be avaialble soon!

Policy: NO BAD VIBES! any one bringing bad vibes to our night will be banned from the venue and all our future events This is an 18 plus event so make sure to BRING YOUR IDS! Dress Code - Anything goes