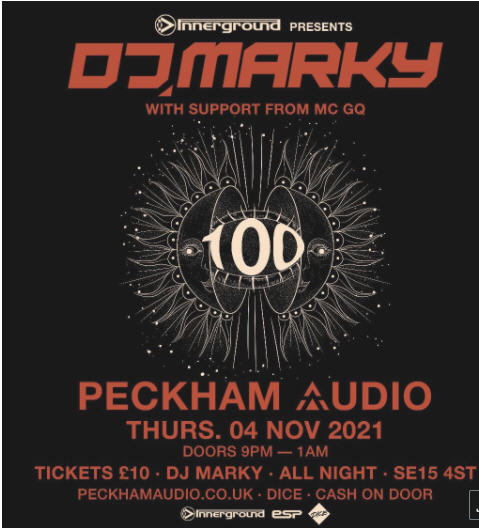 DJ Marky and Innerground Records today announce a special one-off show at Peckham Audio on the 4th November to celebrate the release of the label's forthcoming album Innerground 100. Out on the 5th November, the album marks the 100th release since the seminal label was launched in 2003, and will include tracks from some of the most exciting and best-respected names in drum & bass, including Alibi, Collette Warren, Paul SG, Pola & Bryson, Carlito and more - pre-order here.
The event, which takes place next Thursday as a nod to the legendary Movement club night which helped make Marky's name in the UK, will see Marky play solo from 9pm-1am with MC GQ on the mic. Tickets are £10, available at dice.fm/event/kb9e8-innerground-presents-dj-marky-4th-nov-peckham-audio-london-tickets

Since its inception in 2003, Innerground Records has been one of the driving forces in D&B; a constantly innovating label that, outside of its stunning catalogue of releases from the likes of DJ Patife, Calibre, Nookie, S.P.Y, Voltage, Digital, T>I and Total Science, has created groundbreaking technology with SeratoRye Ln, Peckham, London, synced with FIFA Street 2 and collaborated with Blue Peter to support music education.

Over 20 years into his career, DJ Marky is still one of the best loved and most in demand DJs in the scene. During the pandemic he was one of the first DJs to start a regular live stream to keep connected with fans, swiftly growing a Twitch audience of over 16k followers. Personal milestones include being the first Brazilian DJ to have a top 15 hit in the UK with the iconic 'LK', which led to numerous TV & radio performances, including the legendary Top of The Tops; being the first Brazilian to have a residency at Fabric; as well remixing Fatboy Slim, Everything But The Girl, Claude Von Stroke and Deadmau5. Innerground 100 is a true statement to both the innovative producer and endearing personality that DJ Marky remains; a DJ & Producer that has been at the top of his game for a long time, and is showing no signs of slowing down.